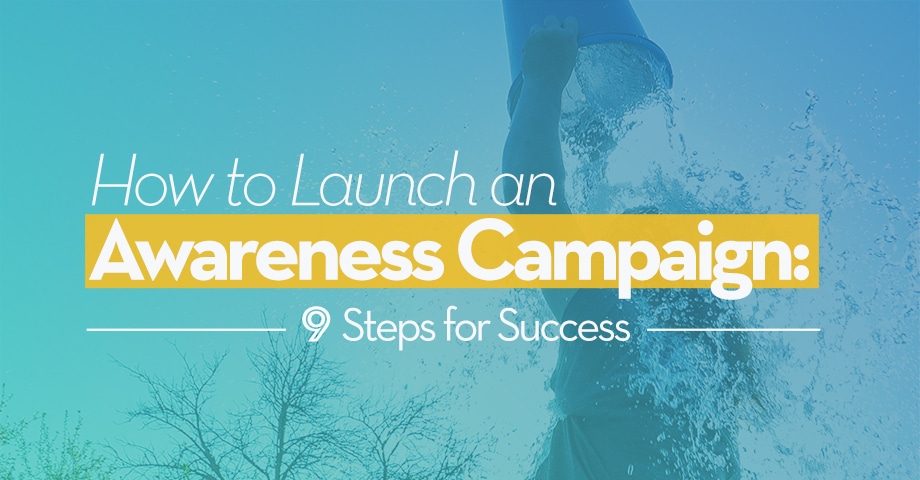 How to Launch an Awareness Campaign: 9 Steps for Success

Awareness Campaigns, which typically focus on a wider awareness day, week, or month, are one of the most popular ways to raise public interest and educate people about a specific charitable issue. Because awareness days and months attract such a wide audience, many charities and nonprofits run specific campaigns around these timeframes to capitalize on the exposure and increase donations.

You’ve probably heard of the most famous Awareness Campaign, the ALS Ice Bucket Challenge, which has raised more than $115 million for ALS charities since it began in 2015.

If your team is running an Awareness Campaign during a larger awareness day, week, or month, it can be hard to break through the noise. That’s why we’ve pulled together nine fail-safe steps to plan and execute your Awareness Campaign.

Because there are so many different awareness days on the calendar, your team might have to do a little research to make sure the opportunity is there.

First, find an awareness day that fits your mission and message. Stay on top of other charitable campaigns that are also focused on this same awareness day. What are some things these campaigns are doing well? Where do you see gaps in the campaign that your team could do better?

Additionally, this is the time to plot and come up with ideas about what type of Awareness Campaign you’ll run. Look at your current donors and determine what type of campaign they will be most excited about. Are they interested in annual giving or do they fall into the Social Donor category. Take your time, do the right research, and make a sound decision that will set your Awareness Day up for success.

This research process should also include long-term campaign ideas such as types of events that your donors might be supportive of, what aspects of your mission that you want to draw the most attention to, as well as the current perception of your cause in the public. Will this Awareness Campaign be targeted mainly towards current donors? Or are you going to try to grow and expand within a new audience?

As with any fundraising campaign, your campaign should be scheduled efficiently to allow both your internal team enough time to plan and your supporter audience enough to engage with your campaign.

For Awareness Campaigns, there is usually a set timeframe that you want to aim for, which is on or during a larger awareness day, week, or month. For campaigns that are more than just one day, an entire awareness week could correspond with the length of your campaign. Scheduling your awareness campaign in tandem with a larger awareness date ensure you can leverage larger awareness marketing and is easier for supporters to remember.

As soon as you have the date of your campaign sorted out, set the date for your awareness event. Whether this kicks off your Awareness Campaign or concludes it, you want to get it on your supporters calendars early so they can plan in advance.

Next, it’s time to figure out your target audience. While some Awareness Campaigns might target a nonprofit’s entire supporter base, this isn’t always the case. Narrowing down this audience segment can help your team target the message, voice, and even the communication channels of your campaign. Use donor personas to pinpoint the supporters most likely to engage in your Awareness Campaign.

The best place to start is in your CRM looking at audience demographics. How does your audience stack up financially against your fundraising goals? If your campaign event is local, do you want to only target local supporters? Use CRM data to figure out the answers to these questions and more to help build a more successful campaign right off the bat.

Additionally, having a good idea of your target audience can help your team narrow down campaign ideas. If you’re dealing mostly with Millennial donors, for example, you might want to focus more on social media and peer-to-peer fundraising. For more traditional audiences, however, channels like direct mail or email might work better.

Your team can also use these audience segments to ensure adequate content, awareness and education is being created.

While your Awareness Campaign should connect back to your overall charitable mission. Research shows that donors who understand and are connected to a nonprofit’s mission, have a higher likelihood of completing their donations. To create the most effective message, your promotional efforts should aim to increase awareness and excitement with both your current donors as well as with a new, wider audience.

Sometimes, nonprofits find that an Awareness Campaign falls pretty close to another annual fundraising event. This is okay, and it’s why messaging is so important. Many nonprofits actually brand their Awareness Campaigns differently than their general message to make them stand out more.

It’s all about understanding the goals and purpose of a campaign and conveying this purpose through your messaging. Awareness Campaigns can trend towards a sillier, more social-compatible side to increase online sharing and engagement. As with any nonprofit marketing and promotion, be sure your message stands out!

Creating reach and casting a wide awareness net is core to your campaign’s success. Involving your board, junior board, executive team and most loyal supporters can really help to create reach for your efforts.

Enlist your most ardent supporters as “Ambassadors.” Ambassador Fundraising allows you to turn these loyal activist into active fundraisers for your Awareness Campaign.

Because Ambassador Fundraising uses competition to reach fundraising goals, it can bring added energy, enthusiasm and motivated giving to any Awareness Campaign.

Sponsors and partners are a must-have in the world of nonprofit fundraising, and this trend doesn’t end with Awareness Campaigns. If you’re worried about competing with other nonprofits during a cause’s specific awareness week or month, try partnering up! This way both of your groups are benefiting from each other’s audience and donor base.

Awareness Campaigns are also the perfect time to partner up with local businesses or local celebrities. Because Awareness Campaigns often last for at least a week, they are the perfect candidate for a restaurant or radio station partnership, which often rely on repeat customers or listeners to drive donations.

Now it’s time for the creative part! For promotion and marketing plans during Awareness Campaigns, it’s all about the omnichannel reach. Don’t throw all your eggs in one basket. Instead, spread your campaign out across multiple channels to reach all of your supporters, no matter where they engage with you.

Some popular channels include:

One best practice here is to know where and how your supporters want to engage with your team before you even launch your campaign. If most of your donors prefer to receive phone calls, it might be a good idea to strengthen your outbound call team. Or, if social media seems to draw the most donations, step up your production schedule and post multiple social posts every day.

Set up your online donation site

If you’re just getting started with online fundraising software, keep the following in mind:

Now that your Awareness Campaign is well underway, it’s time to think about how you will conclude your fundraising. Events are a great way to bring your campaign full-circle, thank your donors and celebrate the milestones from your fundraising efforts.

Events connect your supporters physically to the message and mission your cause is supporting. Consider including an educational element to your event, whether it’s a 5k, bikeathon, or gala, that highlights why this Awareness Campaign is so important. This will help solidify the campaign in your supporters’ minds so they are more likely to stay committed in years to come.

Awareness Campaigns are all about creating long-term, repeatable fundraising opportunities that attract both returning donors as well as new audiences. With these nine steps, your team can get your next Awareness Campaign up and running in no time.