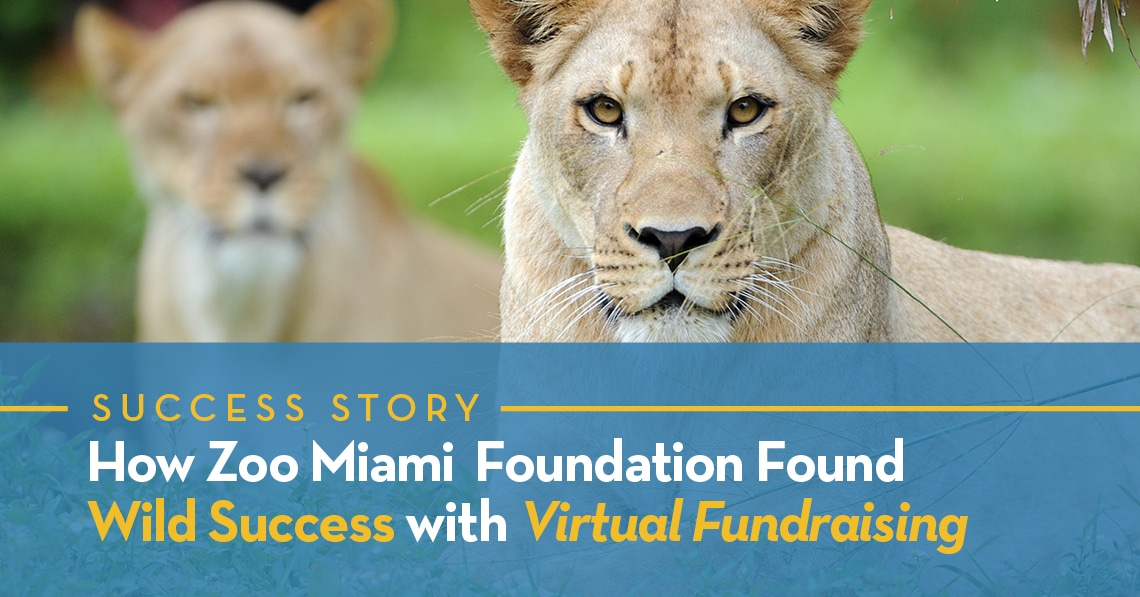 Zoo Miami Foundation is on a mission to share the wonder of wildlife and help conserve it for generations to come. Zoo Miami occupies almost 750 acres and is home to more than 3,000 animals. To support their mission and their wildlife, Zoo Miami Foundation team plans fundraising events throughout the year.

The day before the event, though, the city of Miami enforced a stay-at-home order.

“I had put my heart and soul into this event. We knew there was no way we would let all the hard work that our team put into this go by,” said Paki Fernandez, Zoo Miami Foundation Special Events Manager.

An event that once brought hundreds of vendors and thousands of supporters together to celebrate and support Zoo Miami had to be quickly reimagined. Zoo Miami Foundation was challenged with finding a way to create an equally entertaining but more educational fundraiser.

“We saw it as an opportunity for a reset button. Because it was a strolling gala, Feast with the Beasts didn’t have a speaking portion. So, it was hard to capture the attention of our supporters and put our mission at the center of the event,” said Sarah Chapman, Zoo Miami Foundation Development Coordinator.

Zoo Miami Foundation needed to find a way to:

There was one problem though – they didn’t have the right technology to make it happen. Because the Foundation’s donor base isn’t what they consider ‘technology savvy,’ the team needed a software that was very user-friendly for them and their audience. That’s when Zoo Miami Foundation turned to OneCause to help.

With only 6 weeks to plan a virtual Feast with the Beasts, Zoo Miami Foundation Team recognized the value and importance of having the right fundraising technology to support their mission.

“We got ahold of OneCause because they had such a great reputation in the industry, and we were very upfront with the team during our conversations,” said Fernandez.

The team was concerned about introducing technology into the event because:

“When OneCause was open to hearing our concerns and able to set our mind at ease, we know it was the right decision. They gave us so many great tips so that we could feel supported in our planning efforts. They continuously told us to not be afraid to go for it and try something new,” said Fernandez.

The next step for the Zoo Miami Foundation team was to come up with a compelling run-of-show that added the educational element the in-person event had been lacking. Although a completely new experience for the team, they went ahead with full confidence they could create something spectacular!

The idea was to highlight all the different aspects of the Foundation that guests typically don’t hear about otherwise. Memberships, volunteer opportunities, camp for kids, young professionals’ group, and programs like Conservation Teen Scientists all got a part of the show’s spotlight.

In between that was features of the animals and the zoo’s animal hospital – the reason for the Foundation’s fundraising efforts!

“We were able to show attendees a behind the scenes look that they don’t normally get to see when they come through the gates. That made it such a special experience,” said Chapman.

With the right technology and right run-of-show, Zoo Miami Foundation was ready to rock this new, virtual world! Although they were unsure at first, going all-in for their Feast with the Beast virtual event proved to be wildly beneficial.

By going virtual with OneCause, the Zoo Miami Foundation Team was able to:

Before going virtual, Zoo Miami Foundation was limited by who could attend Feast with the Beasts – because it was an over 21 event and it took place in southwest Miami. Going virtual allowed them to more reach a far wider audience. The team saw supporters from all over Florida and even across the country!

The first ever virtual Feast with the Beast had over 700 guests in attendance – a number far beyond the teams’ expectations.

“We couldn’t have imagined how much going virtual would expand the reach of our organization. We were shown support from all across the country – but especially in different parts of Florida that we would have never reached if we were in-person,” said Fernandez.

While surprising to the team at first, it made total sense! The location of the in-person event meant that no one could simply stumble upon the zoo and join in on the fun. But when supporters around the state (and country) caught wind of the amazing virtual event via friends, family, or social media, they knew it was a can’t-miss. They dove right into the experience – bidding, donating, and connecting to the Zoo Miami Foundation mission.

Open the Auction Early and Keep it Open Later

Some of the benefits that the team saw hadn’t even crossed their minds before going virtual!

“Going virtual and teaming up with OneCause presented benefits that we hadn’t even thought of. We were able to open the silent auction early and leave it open later for people who tuned into our livestream after the event and were called to give,” said Chapman.

When forced to go virtual, the team had to find a way to make their VIP guests feel special! The Zoo Miami Foundation team decided to open the auction early for VIP guests to get their bids first. The team then opened it up to the rest of their attendees so people could get their bids in before the event started.

This, in return, allowed the team to go into the event with fundraising dollars already raised! By using OneCause technology, what used to be a short window of giving was now weeks long!

While Zoo Miami Foundation originally came to OneCause for their virtual silent auction, the team also benefitted from having a wider variety of donation options outside of the auction, including:

Zoo Miami Foundation attributes most of their registered attendees to the text-to-register feature that OneCause offers. Guests were able to use this feature to get themselves registered before the event began to make for an easy giving experience the night of the event.

Even their board of directors got involved! At one of their virtual meetings, everyone was asked to take out their phones, text the keyword, and register for Feast with the Beasts. They loved how easy and convenient it was.

“We loved the OneCause text-to-register option. With COVID-19 these days, people are constantly on their phones and I think it was the easiest, most convenient way to get people involved,” said Fernandez.

Zoo Miami Foundation was armed with the power of a resilient team and OneCause technology – nothing was going to stop them from putting on an impactful, successful event.

Check out these incredible results!

So, what’s next for the Zoo Miami Foundation team?

“We love the idea of going hybrid. Once we’re able to gather our supporters safely, we’ll continue keeping a virtual element to our event. You can see it in the numbers – it provided us with so many benefits that we’d be crazy not to,” said Fernandez.

To learn more about Zoo Miami Foundation and donate to their cause, please visit their website.