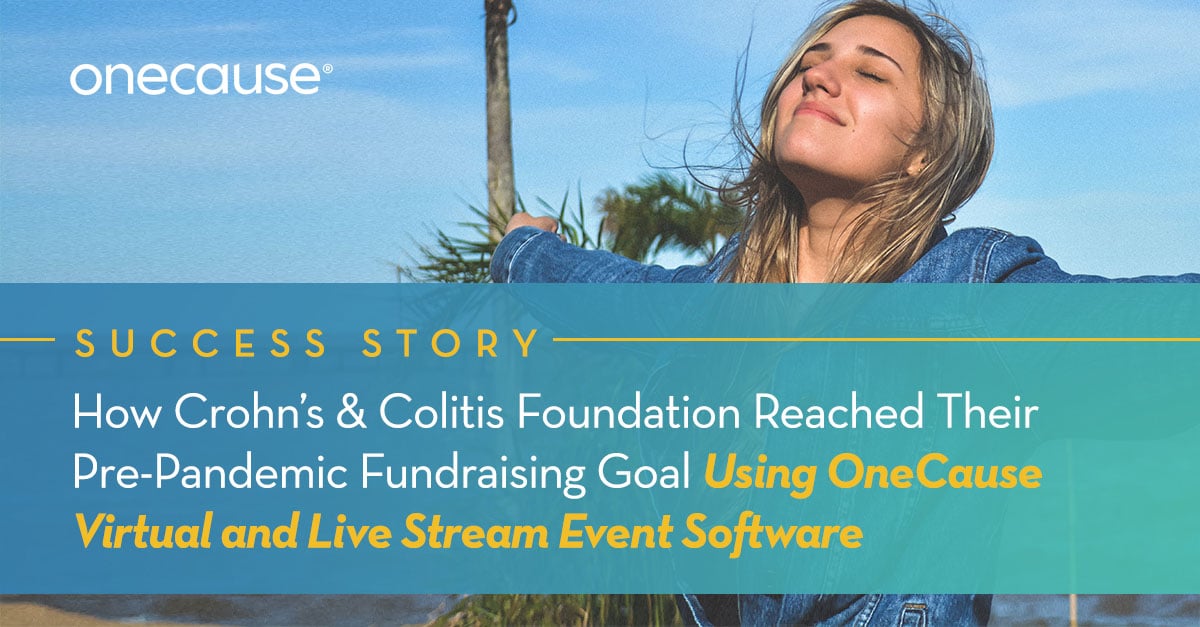 The Crohn’s & Colitis Foundation is dedicated to finding cures for Crohn’s Disease and Ulcerative Colitis and improving the quality of life of children and adults affected by these diseases. This mission has been the heart of the organization since 1967.

The New England Chapter hosts upwards of 10 events throughout the year. It is focused on funding research, raising awareness, and providing education and support to patients and caregivers. United by the mission to care and cure, a team of young professionals set out to create a special event that brings funds and awareness to Crohn’s & Colitis Foundation – A Night in White, the largest and most successful Young Professional’s event for the entire Foundation.

Like many nonprofits though, COVID-19 forced the Crohn’s & Colitis team to completely reimagine their in-person event. They turned to the new Virtual and Live Stream Event software from OneCause to create a multi-media online experience that shined a light on the cause, and brought a human face to their impact and fundraising.

“Crohn’s Disease and Ulcerative Colitis are chronic and, often times, debilitating diseases that you can’t see from the outside. The Virtual and Live Stream Event Software truly gave us and our volunteers a voice and a platform to speak out about what they’re going through,” said Elaina Recuppi, Special Events Director for the New England Chapter of the Crohn’s & Colitis Foundation.

There’s no doubt that the pandemic has made a huge impact on this nonprofit’s signature events. What was once an in-person event that brought donors, committee members, and volunteers together, had to be quickly reimagined.

The team was challenged with finding a way to bring their mission to life while keeping their supporters’ safety and health top of mind. It was clear that Crohn’s & Colitis Foundation needed to find new ways to:

The goal was to create not just a virtual event, but an online experience – one that would highlight their mission, bring people together, and ignite giving in this new giving landscape. 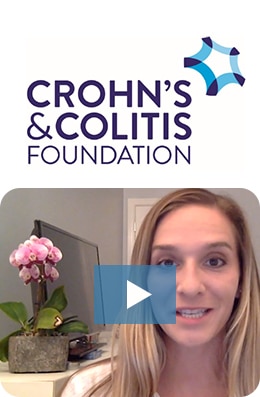 fundraising forward – and A Night in for The Cure was created. They hit the ground running and started to:

While going virtual was an entirely new feat for the Crohn’s & Colitis Foundation team, they found huge success with the OneCause Virtual and Live Stream Event Software.

“It was an amazing experience, not just for our viewers, but also for our volunteers and our patients to take part in,” said Recuppi.

So what were their keys to success?

A Night in for The Cure was a 35-minute show filled with everything from hilarious, SNL-inspired skits put on by volunteers to heartwarming stories of tenacity from the IBD community.

Here are just a few examples of how the Young Professionals Committee brought their mission to life:

The combination of powerful mission moments and easy giving was key to the team’s success. With the OneCause Virtual and Live Stream Event functionality, the live streamed video and the donation process are all on one screen – making it easy for supporters to donate when they feel their heartstrings pulled during the event.

“It’s extremely important, as a fundraiser, to have that donate button there. When that guest feels that emotional pull to make that gift, you want them to easily be able to make that gift right away,” said Recuppi.

Because the OneCause Virtual and Live Stream Event Software combines the power of pre-recorded and live video, the Crohn’s & Colitis Young Professionals Committee was able to accomplish a live and awe-inspiring fund-a-need to drive impact for the mission.

The live appeal included a pre-recorded video at each of fundraising level – starting at $5,000 and ending at $100. At each level, a committee member would describe the impact that that level of donation could have on the organization, put the need into human terms, or highlight a supporter who made a generous donation at that level.

The best part? Guests were able to experience this portion of the event all in one place, staying on one screen while watching the programming and donating in the same place.

“My favorite thing about the virtual event software is that everything is in the exact same place. Your silent auction is right below the place where your video is playing, which is right below your thermometer and donate button. Your guests don’t have to go anywhere else to access what they need,” said Recuppi.

Armed with the power of the OneCause Virtual and Live Stream Event functionality, Crohn’s & Colitis Foundation of New England fought to bring their mission to life in a virtual world – and their efforts were triumphant.

“It was an amazing experience. Because of how simple it was, we were able to hit our original, pre-pandemic, net revenue goal. Which we never thought would be possible,” said Recuppi.

Check out these results!

To learn more about Crohn’s & Colitis Foundation and support their cause, please visit their website.

You’ve taken the first step in virtual fundraising, but the learning process never ends. Get inspired by these additional resources: