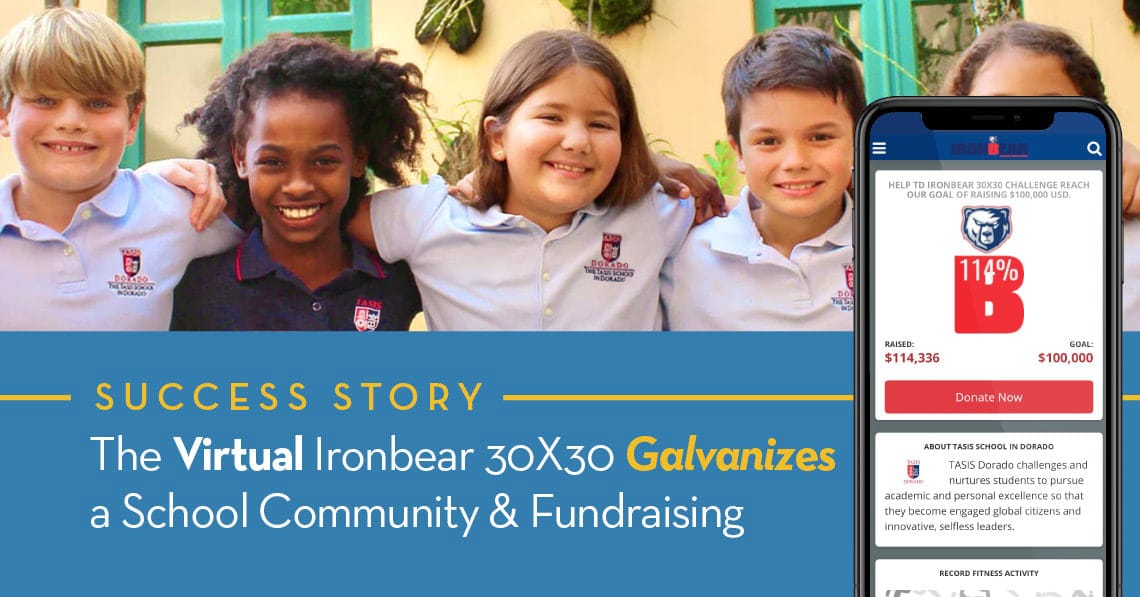 TASIS Dorado, a PK3-12th grade school located in the beautiful seaside town of Dorado, Puerto Rico, has grown rapidly since its founding in 2002. Part of the TASIS network in Europe, the school challenges and nurtures students to pursue academic and personal excellence so that they become engaged global citizens.

With an estimated price tag of $6.5 million, the school was looking for a virtual fundraising campaign during the pandemic to continue raising needed funds to build on the $2 million already raised. In their search, the team found OneCause and was immediately impressed.

From there the Virtual IRONBEAR Challenge 30×30 was born!

Starting in early January of 2020, a series of earthquakes devastated southern Puerto Rico. At the time, many Puerto Ricans were still trying to recover from the shock of Hurricanes Irma and Maria, category five hurricanes that struck the island in September 2017.

After assisting struggling residents of southern Puerto Rico throughout the early months of 2020, the TASIS Dorado team began to revisit the Wellness & Athletics Center Capital Campaign – only to have the COVID-19 pandemic hit and force the team to halt all fundraising efforts. The TASIS Dorado team knew they needed to rethink their fundraising strategy in this new virtual world.

“Our community had gone through so much between the hurricanes, earthquakes, and now the pandemic to top it off,” said Timothy Howard, Head of School at TASIS Dorado. “The island was put under a complete lockdown as of mid-March. We were stymied in our fundraising efforts and we also knew that the lack of physical activity and social isolation was hard on our students because of the lockdown.”

With so many devastating events wreaking havoc on TASIS Dorado’s fundraising plans, they needed to find creative ways to continue their efforts. That’s when Gildren Bengoa, Director of Institutional Advancement at TASIS Dorado, found the OneCause Virtual Fundraising Resource Center.

“We turned to OneCause and began listening to the webinar series, checking out what other nonprofits were doing. What we realized is it’s doable! Something can be done, even during this time,” said Bengoa.

Bengoa and her team of administrators and parents were challenged with combining what other nonprofits were doing successfully and what they had accomplished in the past to create something new for TASIS Dorado – a campaign that would propel their fundraising efforts forward in order to finally break ground on the new Athletics Center.

Despite all that TASIS Dorado and the Puerto Rico community had been through, the school continued the march toward their fundraising goal.

“It was important to continue our fundraising efforts to show our community that no matter the circumstances we weren’t giving up. We strongly believed it was important to finish what we started,” said Betzaida García, the Institutional Development Chair of the TASIS Dorado Board of Directors.

As a previous OneCause customer at another nonprofit, Bengoa knew the impact that powerful technology can have on a mission. Using OneCause’s fundraising technology would allow their team to:

TASIS Dorado decided to go all in with OneCause’s Peer-to-Peer Solution, and the team began brainstorming.

“After everything that had gone on, we needed something more than just fundraising. I wanted to get the entire community involved. Since we were raising money for a wellness center, I also wanted to tie in the mission,” said Bengoa.

That is when the idea for the IRONBEAR Challenge was born, a 30×30 Peer-to-Peer campaign that challenged the TASIS Dorado community to get active for 30 minutes for 30 days. The goal was three-fold: Get the TASIS Dorado community outside and active, build school spirit, and make progress on the school’s push toward their $3 million fundraising goal.

On October 19th the challenge campaign kicked off and it was an immediate HIT with the TASIS Dorado community!

The success of the IRONBEAR Challenge can be attributed to many factors, such as a branded identity; a comprehensive marketing campaign; a formal countdown to the kickoff; daily videos from influential community members; weekly motivation emails and videos; and a formalized team captain strategy. But, according to TASIS Dorado, without the OneCause platform, the IRONBEAR Challenge would not have been able to reach its ultimate goals.

“You wouldn’t believe the support we saw from the community! Because of the IRONBEAR Challenge Peer-to-Peer site, they were all able to jump right in, build personalized pages, and start fundraising,” said Bengoa.

Bengoa outlines three peer-to-peer best practices that were essential to the success of the Challenge:

One of the major benefits of peer-to-peer fundraising is the sense of community it creates. It was a win-win situation!

TASIS Dorado was able to engage existing supporters in a new way, draw in new donors, and raise funds for the athletic facility efficiently. Participants in the IRONBEAR Challenge experienced personalized involvement, became more active (literally!) with the mission, and shared their passion with the school.

The challenge attracted 34 participating teams made up of 310 participants – representing all aspects of the TASIS Dorado community – students, alumni, faculty & staff, families, and even the board of directors!

“Despite the fierce competition with many participants in it to win it, together, we accomplished impressive feats, supported and motivated one another, and came together as a community. It was humbling, yet impressive, to see all that could be achieved in just 30 days,” said Tara McCartney, a member of TASIS Dorado’s Advancement team.

In a time of social distancing and stay-at-home orders, rallying the TASIS Dorado community around the IRONBEAR Challenge was as important as ever.

It was the ability to rally the community that also got TASIS Dorado their $25,000 matching gift, provided by a generous donor to help catapult the team to their $100,000 goal.

“OneCause’s match functionality made it so easy! We could just set the match up in the software with the amount, time, and duration, and the system did the rest. It was truly powerful for our small fundraising team!” said Bengoa.

The TASIS Dorado team knew that for the IRONBEAR Challenge to be successful, they couldn’t let the enthusiasm and excitement ware off.

To prevent the “peer-to-peer slump,” the team gamified their campaign and utilized leaderboards, mini challenges, and weekly drawings.

The leaderboard feature of OneCause’s Peer-to-Peer solution drove some fierce competition. TASIS Dorado was able to highlight the top fundraisers as well as the social media, recruitment, and activity leaders. And it was a race for the top spot!

“Leaderboards were great because people got competitive – especially in fundraising! I had a team that was so determined to win that on the night before the event was going to close, we got a $10,000 donation,” said Bengoa.

To give participants more opportunities to move up on the activity leaderboard, the TASIS Dorado team implemented weekly Bear Boost mini challenges, which were made up of 4 activities each. Specific details of the boosts were announced the night before each mini challenge, encouraging participants to check the site regularly and ultimately increasing traffic to the site.

But it wasn’t all fierce competition for the top spot on the leaderboard. Sometimes it was just pure luck! Like the weekly raffles, for example. Participants who raised $150 or more were entered into a raffle with 3 winners announced on Fierce Fridays. Prizes included a variety of gift certificates ranging from $10 to $25.

There were also cash and swag prizes for participants who completed the challenge and fundraised at various levels. Having their eye on the prize kept participants involved until the very end!

OneCause’s Peer-to-Peer solution integrated with the school’s social channels as well as the participants, making it easy to amplify their message.

Today, many rely on social media to advertise and promote events, thus creating a great deal of content competition when scrolling through one’s feed. Add in the pandemic and TASIS Dorado was presented with additional challenges for promoting a virtual event, making it even more important to ensure the school’s campaign stood out from other posts.

Their approach: Appeal to school-spirit and competitive culture by designing a bold and dynamic marketing campaign with customized branded visuals. For example, the IRONBEAR name and logo played off of the popular IRONMAN competition, using the TASIS bear mascot as a substitution.

“We were on lockdown, but we needed to act quickly before the event kickoff. It was important to keep our strategy simple. We created a social media campaign specific to Instagram, IGTV, and Stories where we had an established captured audience. We posted daily homemade testimonial videos from school “influencers.” Then, we added in music, graphic overlays, and customized fonts which created a consistent and branded look. In the end, it all came together,” said Michelle Yegros, Director of Marketing & Communications.

The school’s approach to social media paid off because they were able to make their mission stand out and come to life! TASIS Dorado’s social media channels featured:

“Our social media channels really took off. It was a great way to promote the campaign, share important information, and then get people back on the fundraising site,” said Bengoa.

Providing unique, shareable content meant participants were more likely to get involved and engaged. But most importantly, having clear call-to-actions in each post meant TASIS Dorado was able to turn social media followers into campaign participants.

OneCause makes it easy! TASIS Dorado was able to integrate their social media channels with their Challenge site and make giving social, mobile, and FUN.

TASIS Dorado School can only be described as resilient. Despite earthquakes, hurricanes, and a global pandemic, the school continued pushing forward for the sake of their community and their mission.

The IRONBEAR Challenge kicked off the school’s fundraising efforts and, safe to say, exceeded expectations. Check out these incredible results!

TASIS Dorado has the momentum to take their fundraising to the next level in 2021, and we’re excited to see all they’re able to accomplish.

To learn more about TASIS Dorado and donate to their cause, please visit their website.

Not Done? Keep Learning with OneCause