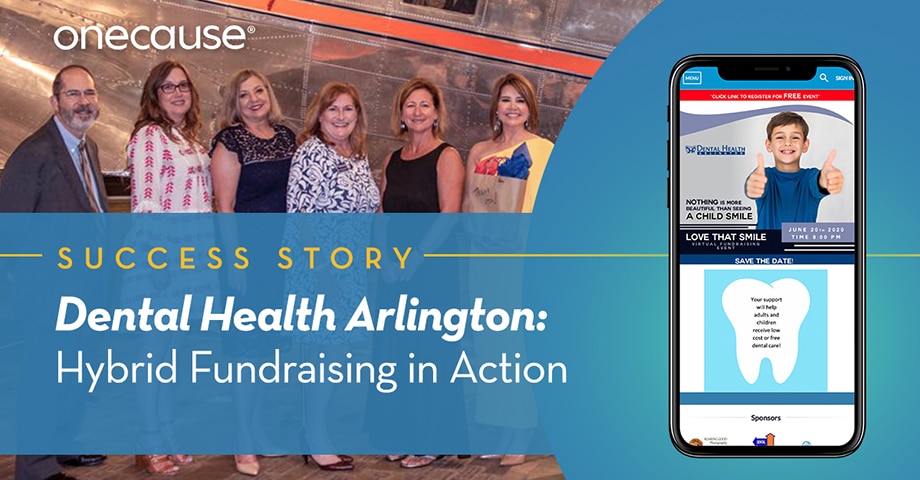 Serving individuals and families since 1992, DHA understands that dental care is expensive, and it is their mission to make a trip to the dentist both affordable and worthwhile.

When the worldwide health crisis hit, DHA knew their nearly 20-year annual event would look a little different in 2020. What they didn’t know is just how different it would be.

The DHA team knew they needed to find a way to:

After initially pushing their annual “Love that Smiles” event from March 20th to June 20th, DHA accepted the challenge and decided to move forward with their fundraising event.

Brainstorming new ways to engage supporters while “Zoom fatigue” became a real barrier to online engagement, the DHA team decided to do something that not many organizations had done before…go hybrid. This meant throwing an event that catered to and engaged virtual and in-person audiences.

DHA sat down and developed a plan to host their hybrid event at an airplane hanger – open with air and ventilation. The venue allowed for 30 people, so they rallied their committee, deserving award winners, amazing production crew and other VIPs.

The DHA team knew that reaching their supporters, capturing their attention, and inspiring them to give was going to make or break the event. So, DHA tapped into the power of OneCause’s Mobile Bidding to provide supporters with an easy giving and bidding experience – anytime, anywhere.

In addition to fundraising software, the team believes the pillars to a successful hybrid event for them were:

The total run time of the event was 1 hour and 40 minutes. It included video commendations from local dentists and community leaders, testimonials from parents, children, and school nurses involved with their SMILES program, as well as awards, surprise appearances, sponsor highlights, and a “Super Silent Auction.”

DHA strategically planned their hybrid event focusing on how to engage with both the virtual and live audiences. The team knew entertainment would be a key driver for engagement, so the made sure to weave it throughout their program. The program included local celebrity appearances from:

To help with revenue generation, DHA took the time to call sponsors personally to ask if they’d consider turning their sponsorship into a donation. They got creative and offered sponsors time on social media, the opportunity to send in a video, hand delivered packages that included raffle tickets with logos, had their names scrolling across the screen during the event, and a featured spotlight on social media following the event. As a result, they retained 100% of their sponsor dollars!

“As far as the video piece for sponsors, it’s something that we’ll do more of in the future,” said Blinn. “It’s amazing how when you have to do these what you learn from them and the reach that we had as a result of doing these videos and the videos were a little bit of everything.”

The outcome was remarkable. Check out their results:

“Typically, we have 150 to 175 people in person, so for us to reach more than 700 people was such an eye opener. That’s why we will do a hybrid next year. It was history making for our organization” – Glenda Bell, Dental Health Arlington, Event Chair