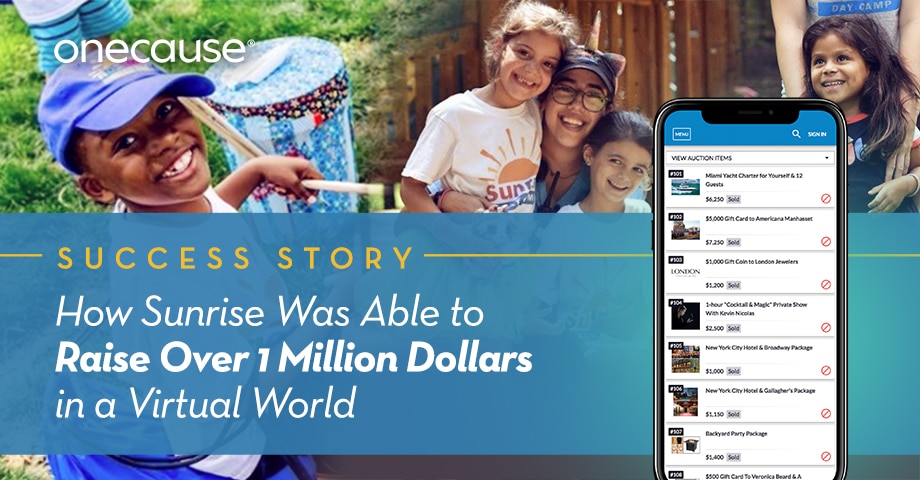 The Sunrise Association is on a mission to bring back the joys of childhood to children with cancer and their siblings world-wide. Since its creation in 2006, the Sunrise Association has developed 8 Day Camps worldwide, 36 affiliated hospitals, 43 Sunrise on Wheels (in-hospital) programs, and has served over 16,000 families – all free of charge.

Through these programs and more, the Sunrise Association replaces months of loneliness and isolation into summers filled with sunshine and happiness.

But, when the COVID-19 pandemic hit, it was unclear how the Sunrise team would continue to power their mission – especially being such a hands-on organization.

As an organization, we’re more of a family. We checked in with every single camper family, making over 1,000 phone calls. Just to check in, ask how they were doing, and ask how we can help,” said Josh Krinick, Development Associate at Sunrise Association.

To keep the programs and community alive and together during a time of social distancing, the Sunrise team needed to find a way to continue their mission in a virtual world – and they did!

The Sunrise Association created a virtual camp experience that combined all 5 of their US based camps and included sending weekly Camp-In-A-Box packages to over 1,000 campers. The team also pivoted their in-hospital program, ‘Sunrise on Wheels,’ to a virtual programming called ‘Sunrise on Screens,’ a YouTube based video programming and ‘Wheels Up,’ an interactive video travelogue. In addition, ‘Surprises from Sunrise’ were delivered to hospitals with curated projects.

At the heart of the Sunrise Association is the children they serve. After pivoting their programming, the team turned their attention to how they were going to sustain their programs – fundraising.

Right away we knew that COVID-19 was going to affect our programming, our fundraising, and our entire organization,” said Krinick.

With three of their most influential events approaching, the Sunrise team decided to postpone the events until October. But as time went on, it was clear they wouldn’t be gathering Sunrise’s supporters together, in-person, in 2020.

We looked at what other nonprofits were doing, and they weren’t postponing – they were using technology and going virtual,” said Krinick.

With this in mind, the Sunrise Association needed to find a way to:

First, the Sunrise Association launched an Awareness Campaign “Urgent Campaign,” explaining to donors that the children they serve need Sunrise’s magic now more than ever. With targeted direct mail, aggressive email campaigns, and personal outreach to top donors, Sunrise was able to rally their community around the importance of the mission.

We created a lot of momentum with that campaign, but we still had postponed three events… that funded many of our core programs.  That’s when we looked into combining them into one,” said Krinick.

Tapping into the power of OneCause virtual fundraising software Sunrise Association decided to bring all the events together into one event – it had the potential to be life changing. And so, SunriseLIVE was born – an engaging livestream program hosted by Andy Cohen. It consisted of pre-recorded and live video entertainment as well as a silent auction and donation appeal using OneCause’s Mobile Bidding platform.

The night went off without a hitch! Sunrise Association created powerful mission moments while simultaneously providing entertainment and laughter, and it resonated with their donors. So much so that they had to raise their fundraising goal THREE TIMES during the event!

When asked what made SunriseLIVE so successful, Krinick responded with three key points:

The team broke off into four subcommittees, all with specific responsibilities to get the job done. These included:

My advice to nonprofits is to find the people you know will take those risks with you, lead by example, and go all in for your mission,” said Krinick.

Going virtual with SunriseLIVE! gave the Sunrise Association the opportunity to raise more money and reach more donors. But they knew the event wouldn’t be a success if they simply re-created what they had planned for their in-person events and made it virtual.

By going virtual you have the opportunity to take a risk and do something new different that you couldn’t do at an in-person event,” said Krinick.

And it’s safe to say that it paid off! SunriseLIVE! was the team’s first ever livestreamed fundraising event. Hosted by Andy Cohen, Bravo TV’s late-night talk show host, the team created a program that was both entertaining and heartwarming by focusing on having fun and promoting Sunrise’s mission.

Cohen hosted numerous donor check-ins where they went live into a donor’s home and played games. These included “Would you rather” with the event’s silent auction items and “Who wore it best” with outfits worn by celebrities and Sunrise’s campers. It was unique. It was entertaining. It was all about the mission!

It was unique. It was entertaining. It was all about the mission!

And it definitely resonated with donors. Through the use of OneCause’s 120+ real-time reports, the Sunrise team was able to see spikes in their donations and bidding during their fun-filled, heartwarming program.

Invest in the Right Technology

A major key to the success of SunriseLIVE was investing in the right technology – both in mobile bidding and video production.

One of the most special moments of the event was a mission-focused video that highlighted a family of a Sunrise Camper. They were interviewed about what it was like having a child with cancer, what Sunrise Day Camp meant to them, and how their child was doing now.

It was important to us that when our donors felt compelled to give, we could give them an easy giving experience. OneCause’s technology gave us that,” said Krinick.

What took their pre-recorded videos and livestream to the next level was the added level of professionalism that came with hiring a camera crew.

With the professionalism of our video production team and the Giving Center thermometer going up throughout the event, it looked like a professionally produced TV show. I was overjoyed when I saw it all come together,” said Krinick.

The right technology can not only make or break your supporters’ experience, but also your fundraising goals! Speaking of fundraising goals… let’s dive into the final numbers of SunriseLIVE!

Armed with the power of OneCause, engaging content, and a compelling giving experience, the SunriseLIVE event went above and beyond the team’s expectations. With an original goal of $350,000, the team raised over 1 million dollars to support their mission.

Our supporters really showed up. They showed up in a big and powerful way. They blew us away,” said Krinick.

Check out these amazing results from the SunriseLIVE event:

As for the future of Sunrise fundraising, Krinick explained that the benefits of going virtual were something that couldn’t be ignored.

Next year we plan to do a SunriseLIVE 2.0. Whether it’s fully virtual or a hybrid event will be based on the state of the pandemic, but some piece of the event will definitely be virtual. It benefitted us in countless ways,” said Krinick.

To learn more about the Sunrise Association mission and to donate to their cause, please visit their website.