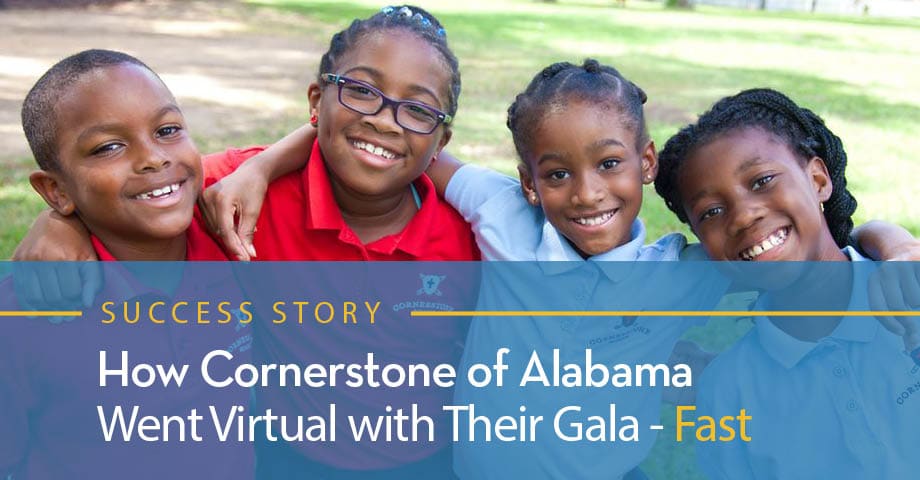 Cornerstone Schools of Alabama offers a private Christian education to students in K4-12th grade. Each year Cornerstone hosts its annual Schoolhouse Rock event – featuring live music, a wine toss, silent auction, and event giveaways. It has been voted Best Charity Event for four years in a row by About Town Magazine.

But, just 1 day before Schoolhouse Rock, COVID-19 forced the school to completely pivot their event.

Cancelling the event was not an option for the Cornerstone team. Schoolhouse Rock is one of their biggest events of the year, and the funds were an absolute must-have to power their mission. Needless to say, the show had to go on – virtually.

Their small but mighty team had only 24 hours to pivot their in-person event to a virtual event and communicate with all sponsors and guests about the change of plans.

We had over 600 guests registered for the event, which was a record-breaking number for our school. We also have a really special group of sponsors who we rely on to help make the event a success. That’s a lot of people to communicate with in a short amount of time,” said Eve Hennessy, Special Events Coordinator of Cornerstone.

Hennessy knew that in order for their virtual event to be successful, the team needed to move fast, communicate often, and be authentic.

Hennessy’s first step of action was to reach out to her OneCause’s Customer Success Manager, Sarah, to start the process of going virtual.

I reached out to Sarah in panic and she did a great job saying, ‘We’re here for you, we have it handled, here’s a virtual event manager to help you.’ It was just handled so well, and that was very calming. The response was great,” said Hennessy.

The next steps were to reach out to sponsors, get donors engaged, and go virtual with their event!

Cornerstone relies on the generous support of its sponsors each year. Hennessy’s team understood that taking Schoolhouse Rock virtual meant sponsors would be receiving the benefits of their sponsorships in a very different way.

Highlighting sponsors at an in-person event and highlight sponsors at a virtual event are two very different tasks. We had to be sure to offer unique digital sponsorship opportunities to make sure our sponsors still felt the love. Once we had that plan in place, we made calls to each sponsor and appealed for continued support” said Hennessy.

After hearing the news of the event moving to virtual, all sponsors were still eager to show their support toward Cornerstone.

No one pulled their sponsorships. They knew the reason for their support remained the same. And in times like these, they knew their help was needed now more than ever,” said Hennessy.

After securing the support of Cornerstone’s sponsors, it was time for Hennessy’s team to communicate with their donors.

We sent out an email to our entire donor base letting them know that, while the decision was difficult to make, we knew it was the right thing to do to cancel the in-person event. This was for everyone’s health and safety. This was for our kids,” said Hennessy. “After that, it was honestly a plea for their support – this is all we’ve got left. And the response was overwhelming,” she continued.

Cornerstone saw an outpour of support from their donors.

I think a lot of donors respected the fact that we did cancel our in-person event. We had a lot of responses to our email saying ‘We know how much of a difficult decision this was. We respect it and support you. We’re going to make a donation right now.’ That was incredible,” said Hennessy.

Hennessy also saw firsthand that going virtual means you can appeal to a larger audience. By including the link to Cornerstone’s giving center, the email got supporters involved in the auction that weren’t previously registered for the event. 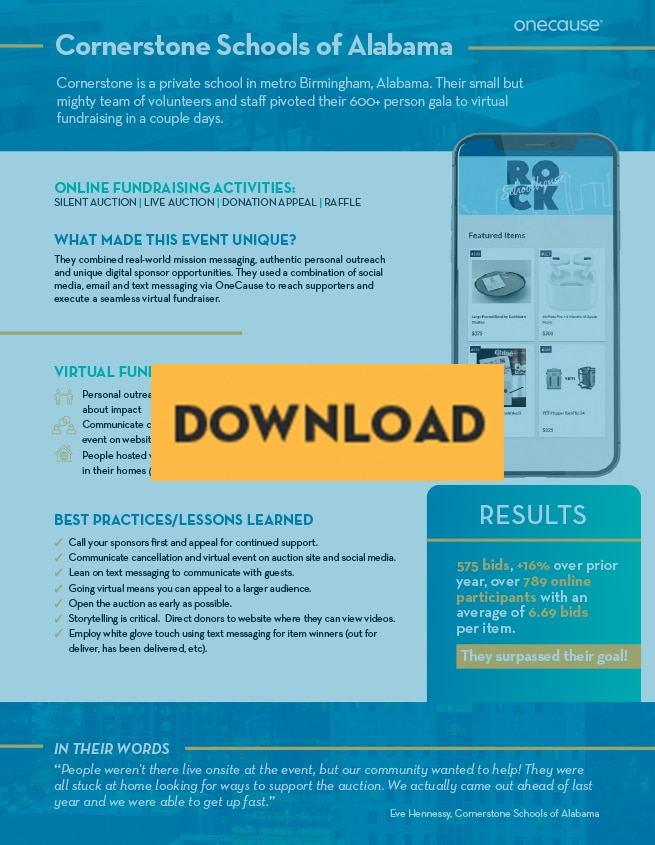 Cornerstone experienced how quick the pivot to virtual could be with OneCause. All the team had to do was use the welcome page to communicate the decision to switch to a virtual event and make the auction items live!

In order to keep the excitement high and the bids rolling in, Hennessy and her team took to social media and text messaging.

Cornerstone was blown away by the engagement they saw.

It didn’t matter that people weren’t there live onsite at the event. Our community wanted to help! They were all stuck at home, eager to show their support and I think that really showed,” said Hennessy.

When asked what she was most surprised about, Hennessy was quick to mention the school’s mature donors.

Our mature donors have been the ones who have supported our virtual event more than anyone. We were able to engage some of our larger donors who are in their 60’s or 70’s that may not be able to come to our events but still want to support us,” said Hennessy.

With the support of their community, donors, and sponsors, Cornerstone was blown away by the results of their virtual event.

By combining real-world mission messaging, authentic personal outreach, and unique digital sponsor opportunities, Cornerstone found immense success by going virtual. But they didn’t stop there! Hennessy’s team continued to utilize the OneCause platform even after the event was over.

After the auction closed, Hennessy thought of a way to employ a white glove touch by using OneCause text messaging with item winners.

We’ve added such a professional touch to our donor engagement by using OneCause. After the auction ended, supporters weren’t able to simply pick up their items and take them home with them. So, we were able to text guests an update on the status of their item,” said Hennessy.

With the support of their sponsors, donors, and OneCause technology, Cornerstone found success with taking their event virtual.

You can learn more about Cornerstone Schools of Alabama and support their mission by visiting their website.