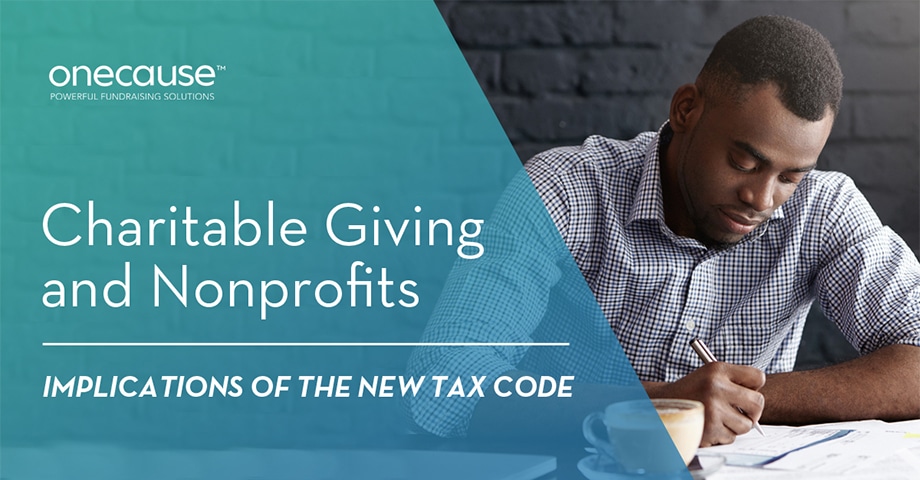 Charitable Giving and Nonprofits – Implications of the New Tax Code

When it comes to making charitable donations, few donors do so just to receive a tax deduction. Most give to a cause because it’s near to their hearts and they believe in the nonprofit’s mission. Even so, as the height of tax season approaches, many of last year’s donations are top-of-mind for donors. And those deductions are nothing to sneeze at—particularly for those who contributed larger gifts.

Though a nonprofit’s cause will likely be the primary motivation for donations, tax write-offs can serve as a strong motivator to give just a bit more. However, recent legislative decisions could put some of those charitable donations at risk—or at least create some stress during the filing process.

The new tax law, according to estimates from the Council on Foundations, will drain $16 billion to $24 billion a year from the nonprofit sector going forward. For any sized nonprofit, that drain could be hazardous.

Changes to the tax code based on the new law will impact nonprofits across the board, but it doesn’t have to be a death knell. We’ll simplify what the tax code means for your nonprofit, your fundraising efforts, and also share a few important tips for how to keep the new tax code from devastating your nonprofit budget.

The new tax code is a serious hot topic and has many in the nonprofit world worried—
and for warranted reason. The increase to the standard deduction could cause a drop in charitable giving. According to an NPR interview with Larry Lieberman of Charity Navigator, the new tax bill increases the standard deduction, meaning that fewer middle-class Americans will benefit from listing individual deductions, like charitable donations, on their tax returns. While the middle-class American may not see this as a big deal, nonprofits certainly do as they count on these donations as the bread and butter to further their cause. Between 70 and 90% of all U.S. households donate to charity in a given year, and the typical household’s annual gifts add up to between $2,000 – $3,000, with the vast predominance of offerings coming from those with moderate income.

The only way to see a tax benefit from charitable contributions used to be through itemizing the tax return—listing each of those donations one by one. Now, the new tax act has raised the standard deduction from $6,350 to $12,000 for single individuals and from $12,700 to $24,000 for married couples—almost doubling the standard deduction. This provision will provide a higher overall deduction for many taxpayers, but will simultaneously impact charitable giving because, according to the article, “only those who itemize their deductions, instead of taking the standard deduction, get the benefit of a charitable contribution deduction.” Many Americans will find out when they go to file their taxes (if they haven’t already) that itemizing doesn’t have the same benefit that it used to. So much so that Lieberman claims the estimate is that as many as 30 million more Americans will choose not to itemize their tax returns.

Clearly, this can create substantial confusion for both the nonprofit and the donor network alike. In fact, many organizations are reporting that donors are calling to ask if they should hold off on their giving until the following year, and just as many are asking if they should give now versus later.

The regular calendar of giving has allowed nonprofits to build extremely lean yet highly effective processes and procedures. For example, the end-of-year holiday time and Giving Tuesday present huge opportunities for nonprofits as 30% of annual donations are made in December. Most donors have those dates in mind as key times for donating to their favorite causes. But if the incentive to hit those days isn’t as important, it could impact giving across the board. The good news is that there are several things nonprofits can do to keep the donor funnel moving along throughout the entire year.

The New Tax Code Doesn’t Have To Devastate Nonprofits

While the changes in the tax code will inevitably impact the way some people give, it doesn’t have to devastate charities. Their margins — tight in most circumstances — need not be minimized to make up for the impact.

Today’s nonprofits have a multitude of resources at their fingertips that can help them attract donations throughout the year. By maximizing the resources and technology used to engage new and existing donors, nonprofits can get them excited about the organization and cultivate contributors year-round. By setting up an easy online giving portal or microsite, donors can read up on the nonprofit’s mission and donate automatically on monthly or quarterly basis rather than waiting until a specific date or big charitable event. Another strategy for nonprofits is to set goals for turning one-time givers into recurring donors or multi-year donors—this can have a huge boost to planned revenue streams.

Engaging with a fundraising software company can also help nonprofits acquire new donors, amplify their message, and raise more funds with easy-to-use technology. For example, easy integration with CRM databases can allow seamless, up-to-date and relevant communication with donors year round—encouraging, updating, and reminding them of the cause the organization is working towards. Using the right fundraising software can make all of this possible without adding to the workload of the already-strapped staff or volunteers.

Lastly, nonprofits can benefit from planned giving, which is when a passionate donor allocates a gift or recurring gifts to an organization that they believe in to be distributed once they pass. If nonprofits are strategic and segment out their most loyal and large donor base, they can target these individuals for longer-term donations, using the tax code changes as a way to galvanize their base and protect their mission at the same time.

Nonprofits are certainly used to overcoming challenges. Day after day they do amazing things, working to further their causes while keeping overhead expenses low. Doing that means capitalizing on their two largest resources: their staff and Board talent as well as the generosity of their donors. This latest move tax code change will create new issues, but it won’t dampen those two bright areas.