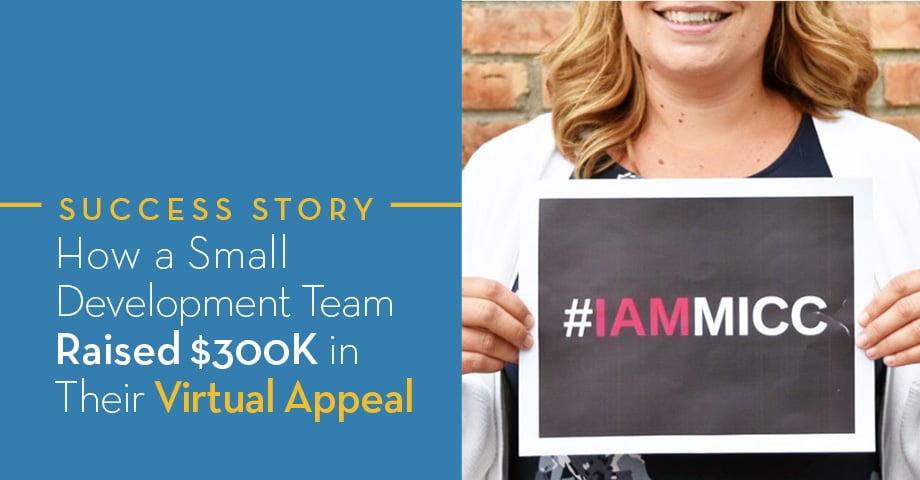 MICC: How a Small Development Team Raised $300K in Their Virtual Appeal

Minnesota Independence College & Community (MICC) works to transform the lives of individuals and families affected by autism spectrum disorder and learning differences. MICC relies on the funds raised by supporters to enhance the quality, accessibility, and capacity of their college careers and community programs.

MICC has a small, but powerful 2–person development team. Their annual gala raises a large portion of the annual funds needed to fulfill their mission.

Nonprofits everywhere are making tough decisions surrounding in-person events. Many nonprofits, like MICC, rely on the funds raised during their annual gala to power their programs. This means canceling or postponing an event isn’t an option.

But the pressure was on for the team to pivot their 600–person gala in just a few days without losing momentum from their program.

“We didn’t lose anything we had planned [and] our virtual event delivered what we wanted for our in-person event. Our development team is a team of two. Anybody can do this!” said Sletto. 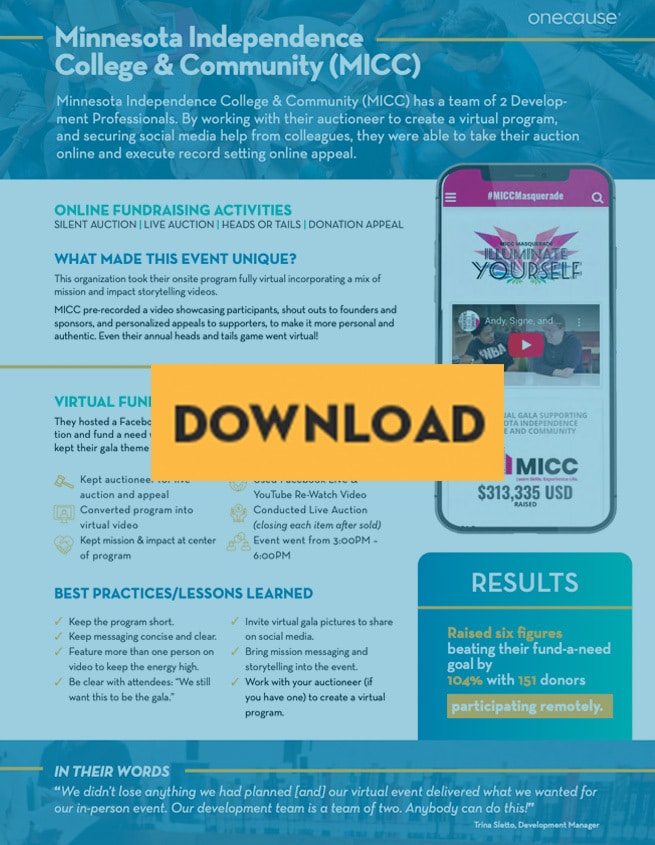 “I think that piece of having two people doing the program that are really authentic, believe in the mission, and are well known among the audience is really important. It was less of people talking at you and more of you being a part of the conversation happening,” said Sletto.

“You’d see rooms full of people dressed up in their thematic attire. You could see the TV screen in their room and our executive director up on the screen speaking and they’re all just glued to it. It’s not your typical gala picture you see, but it was really cool that everyone was just in it,” said Sletto.

Just because your event is going virtual, doesn’t mean you need to take anything out of your program.

Every year MICC’s heads or tails winner chooses the theme of the next years gala, so they didn’t want to lose this aspect when moving virtual. So, they had their students demonstrate the game and then asked the audience to buy slots on their phones. Attendees everywhere played in their living rooms, at their small watch parties, virtually, and on camera until a winner was chosen.

This is a great example of keeping traditions alive and making them super fun, creative, and engaging.

MICC was able to get creative and give their sponsors digital visibility during their event. They even went above and beyond to include sponsors both visually and verbally in their virtual event program.

Using the PowerPoint that they planned to play throughout the in-person program, they highlighted sponsors and played it virtually during the first 2 minutes of the event while people waited for the virtual gala to begin. During their event, along with participant and donor shoutouts, they gave shoutouts to their sponsors.

You can learn more about MICC and support their mission by visiting their website.