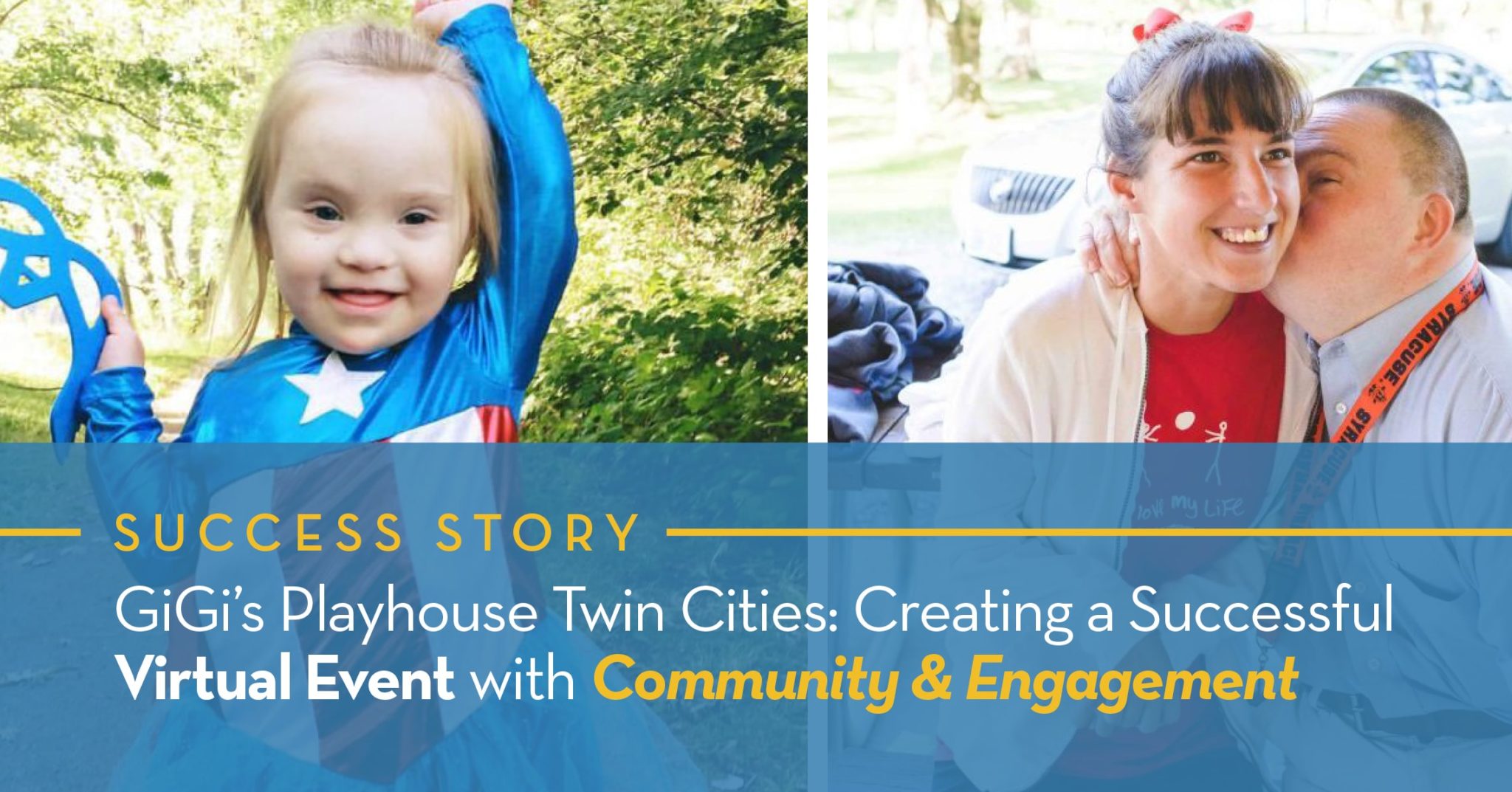 GiGi’s Playhouse is a National Nonprofit Organization created to change the way the world views a Down syndrome diagnosis and send a global message of acceptance for all.

The very first Playhouse was established to be an inspirational and dedicated place for families to celebrate their child and benefit from free, purposeful programs that unleash joy, confidence and continuous improvement.

Flash forward and now 50+ Playhouses empower children and adults to achieve their “Best of All” and to pursue their dreams.

One of these Playhouses is in the Twin Cities—Minneapolis, MN.

With their mission and support from their community as strong as ever, they were ready for their Annual Gala.

Until… COVID-19 had a different plan.

Like so many other nonprofits, GiGi’s Playhouse Twin Cities was evaluating their options with transitioning to an all-virtual gala.

Their two main concerns were:

Our Annual Gala typically is our largest fundraiser of the year in Minneapolis. With COVID-19, we had to get back to our roots and really evaluate what was key in making a virtual gala a reality that was true to GiGi’s Playhouse,” said Sarah Sender, Operations Director at GiGi’s Playhouse Twin Cities.

After evaluating their options, the team decided to go for it. They committed to a virtual gala no matter the number of unknowns that went along with it.

As they look back at their success, here are their virtual fundraising strategies & lessons learned:

Build Relationships in a Virtual World

GiGi’s Playhouse Twin Cities knew they weren’t alone in navigating the effects of COVID-19 and the transition to virtual.

Specifically, they knew their donors and local businesses were also navigating these difficult times.

So, what did they do? They acted. They picked up the phones and started outreach to donors and local businesses they had partnered with in the past.

With their upcoming virtual gala, GiGi’s PlayHouse Twin Cities wanted to team up with local businesses to help each other and make the event a true community partnership.

They reached out to 3 local restaurants that had supported them in the past and proposed the idea of a partnership for their gala. The restaurants could cater their meals on GiGi’s Twin Cities event night as meal kits.

Virtual is about relationships. While we’re moving forward with the technical aspects of virtual fundraising, we also must stay grounded in our foundation. The mission & our community,” said Hughes.

When navigating something new, GiGi’s Playhouse Twin Cities wanted to be sure to over communicate with their donors & supporters.

Yes, they had used OneCause Mobile Bidding in the past, but they hadn’t totally relied on it like they had to this year.

For them, setting expectations was key to engagement in the virtual gala world. It could be as simple as clear event communication and a simple fundraising site. 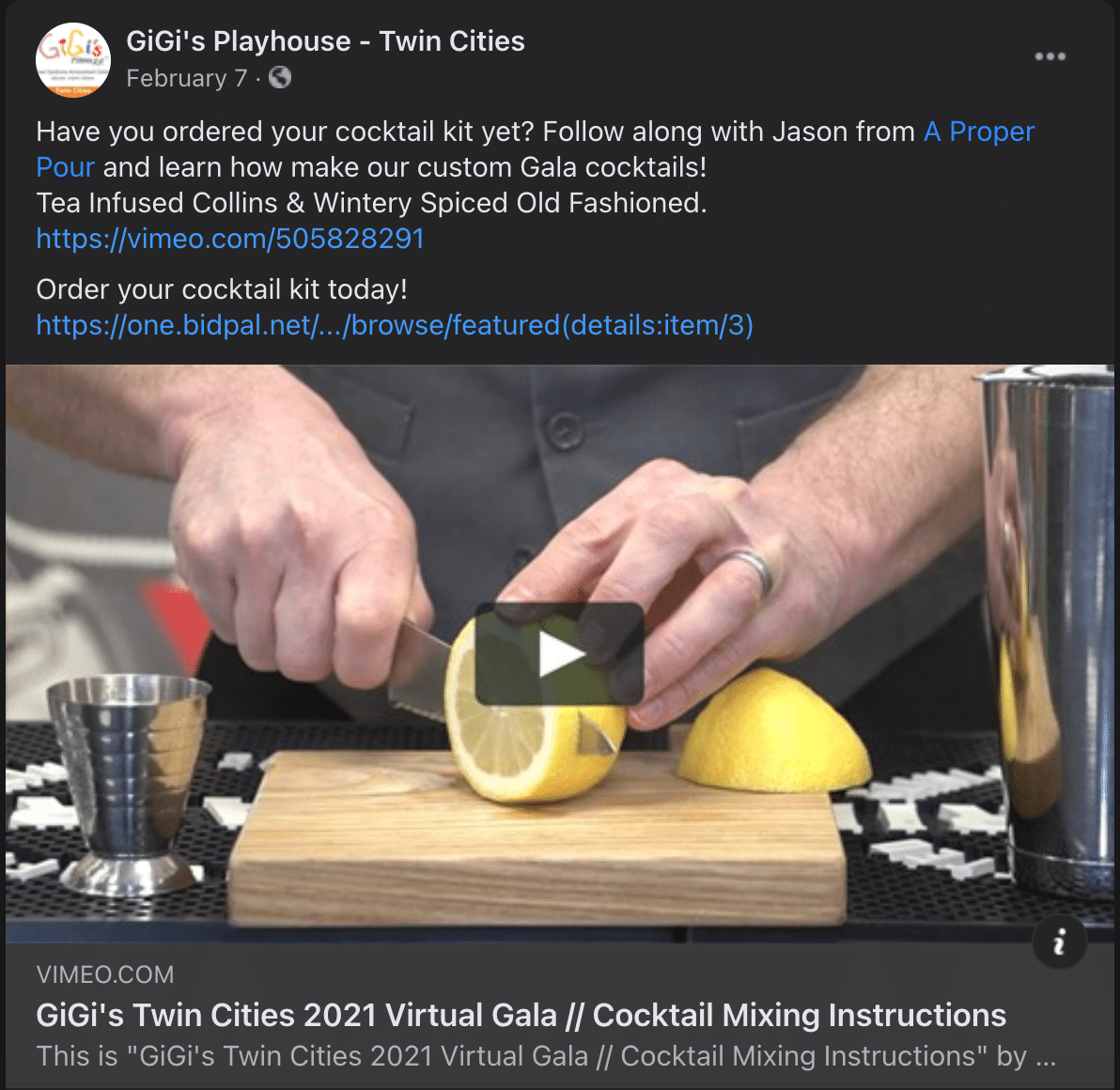 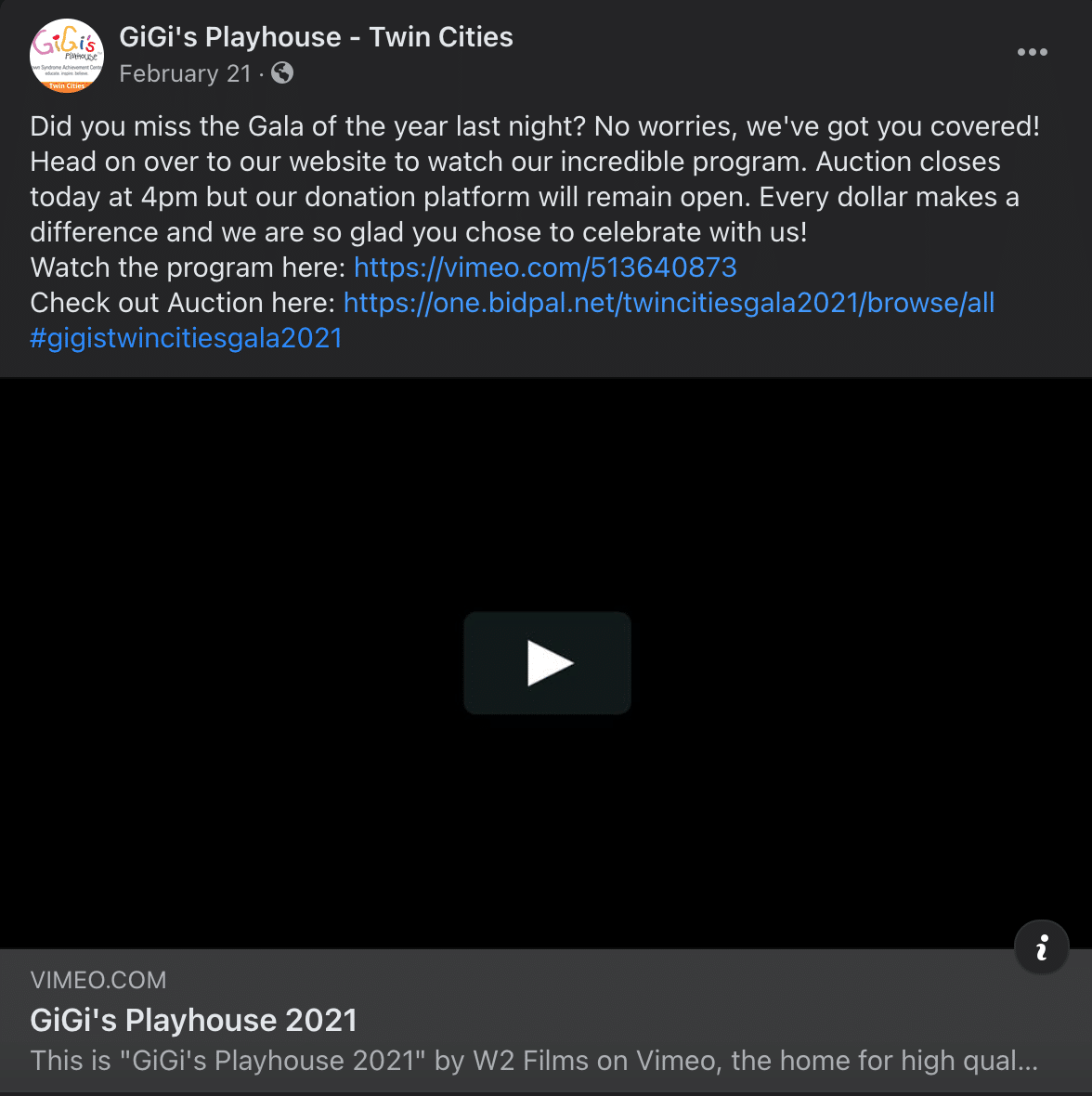 The key to virtual success is setting the stage for what to expect. After setting expectations, hook your audience who are on the live stream with you (the beauty of virtual is that they can also tune in later too). Having a meal / cocktail kits lets people know that they are valued (and they are fun!),” said Hughes.

With the site ready, auction items secured, and the momentum from their community, GiGi’s Playhouse Twin Cities was ready to start fundraising.

After doing their research, they saw that most virtual events in the nonprofit space were offering virtual gala tickets free of charge. With this in mind, they wanted to see if they could drive value with other ticketing options.

GiGi’s Playhouse Twin Cities offered general admission free of charge, but then also offered VIP ticket packages for two people up to twelve (with package price increasing as the number of people increased). 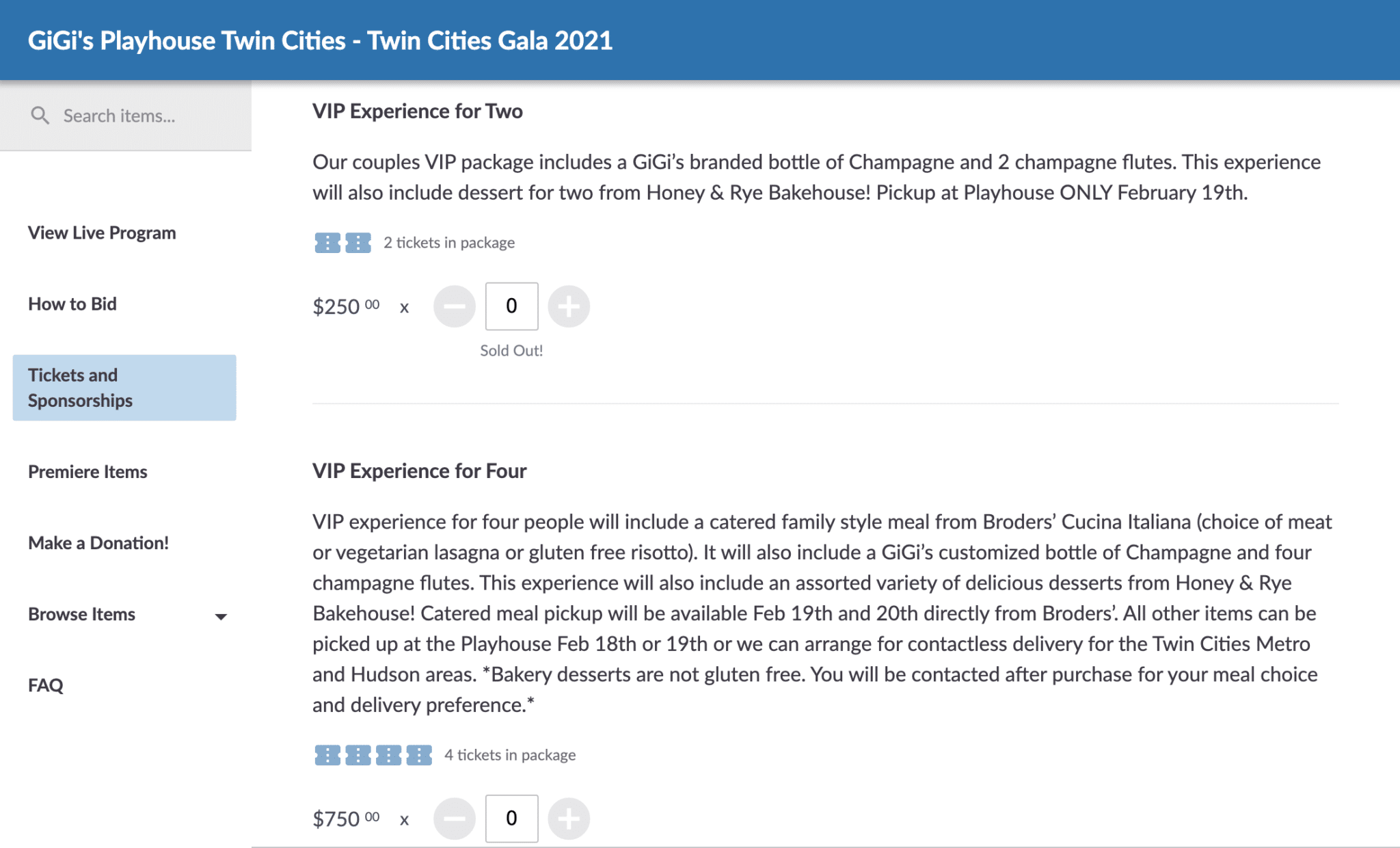 This strategy drove one-third of the total revenue for the entire virtual gala.

This feature gives your donors the option to cover the transaction fee associated with their donation – something they had never enabled in the past. It drove value beyond the virtual ballroom and allowed donors to opt into giving the organization the full amount of the donation.

The only donation you won’t get is the one you don’t ask for,” said Clare Mitchell, Chief Technology Officer at GiGi’s Playhouse Inc.

GiGi’s Playhouse learned that if you offer donors the option to cover the transaction fee, only positive things can happen.

As a strategic tactic, the auction stayed open for 18 more hours once the live steam program ended.

They learned that the great thing about an online auction is that you can extend the bidding time far beyond what you can with an onsite event.

We saw a huge flurry of activity right before the auction closed around 4 PM on Sunday – almost 24 hours post-event. We never had that option for more support post-event at our in-person auction!” said Sender.

Virtual fundraising releases the boundaries on timing that you are tied to with an in-person event, and with a great strategy and a little courage, GiGi’s Playhouse Twin Cities knew the transition to a virtual gala paid off.

With the community & an engaging virtual gala at their back, GiGi’s Playhouse Twin Cities was excited to see the results of their hard work.

Believe that you can. Take a risk. Be bold. Keep moving forward no matter what the world is doing,” said Mitchell.

To learn more about GiGi’s Playhouse Twin Cities and donate to their cause, please visit their website.