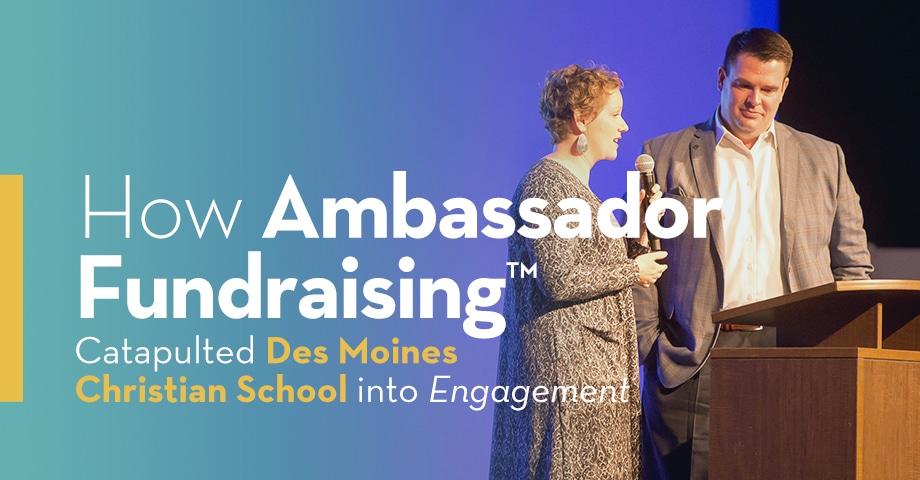 Beginning in a church basement almost 70 years ago, today Des Moines Christian School has 1150 students in early education through 12th grade. The mission has stayed the same throughout its existence in central Iowa: to equip minds and nurture hearts to impact the world for Christ.

This past year, the fundraising team decided to dive into the world of ambassador fundraising after listening to a OneCause webinar. This new fundraising strategy allowed them to engage their donors in a different way by leveraging a core group of their most engaging constituents with a fun and competitive giving element.

We got off of the webinar, and I looked at my colleague and said, ‘That is it. That is how we need to engage our donors.’ We even watched the webinar again, and then proposed it to our advancement director,” said Kristin Phillips, Director of Annual Giving.

Over the years, Des Moines Christian School has partnered with OneCause and used the mobile bidding platform for their annual gala/auction event. This year they really wanted to grow programming within the school and needed a hugely successful event.

Like most nonprofits, the struggle to reach new donors outside of their reliable donor base was a challenge for Des Moines Christian School and something they would need to achieve success.

The team started brainstorming new ways to fundraise. They wanted to extend beyond the walls of Des Moines Christian School, and even central Iowa. When they tuned into the OneCause Belle of the Ball webinar, they struck gold. Like Alamance Charitable Foundation, they were going to reenergize their gala and revolutionize their fundraising with ambassador fundraising!

The pieces started coming together. We knew we could craft this idea in our own unique way that fits our culture and would engage donors,’ said Phillips.

By utilizing OneCauses’ products, they were easily able to put their ambassador fundraising plan into action.

We felt that Ambassador Fundraising was going to catapult us into engagement with our community and even beyond. Creating a campaign that allowed us to leverage our donor’s network was exponential. That is the true power of social fundraising,’ said Phillips.

The Des Moines Christian School team got together and set a lofty goal of $250,000 raised for the Lion Fund at annual True-Blue Gala, as a way to spur additional live appeal donations.

Their Ambassador Strategy was unique:

“We really created our own ambassador campaign from the flexibility that the OneCause software offered. We knew we wanted to use mobile bidding from our success with it in the past, but we also wanted to use what we learned in the ambassador fundraising webinar to utilize peer-to-peer products for pre-event fundraising,” said Phillips.

These couples brought the heat. In 30 days, the ambassadors reached their goal and raised over $105,000. The team used contests and challenges to excite donors and reach people near and far on social media.

The excitement and engagement were at an all-time high in just 30 days of fundraising! The power of social fundraising and engaging broader giving networks had powered the team to their goals. Ambassador Fundraising allowed their community to grow and extend to people it never could at just an auction or gala.

With the momentum from the pre-event ambassador fundraising, they now have a goal of $145,000 more to raise at the gala. 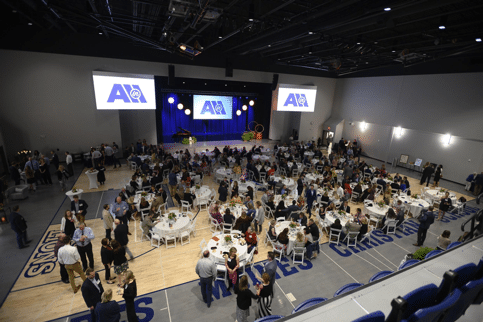 The big night was here. Now it was up to the ambassador fundraising results and a night of event attendees trying to push Des Moines Christian School over their fundraising goals.

The ambassador fundraising only amplified the excitement for our gala. We actually highlighted the five couples and brought them up on stage to show their hard work and dedication to the school and each facet of the Lion Fund. This only excited the 320 guests in the room even more,’ said Phillips.

The five ambassador couples shared their personal stories about why the school and the Lion Fund were important to them. After this, they announced to the room that this small number of ambassadors fundraised an incredible $105,000. This announcement incited an energy in the room, and the event fundraising caught fire.  “An audible gasp took place in the room,” said Phillips.

You will never believe what happened next.

“It takes a community to do incredible things,” said Phillips, “and everyone was ALL IN.”

Want to re-energize your fundraising with ambassador fundraising? Check out these resources below and put them into action!