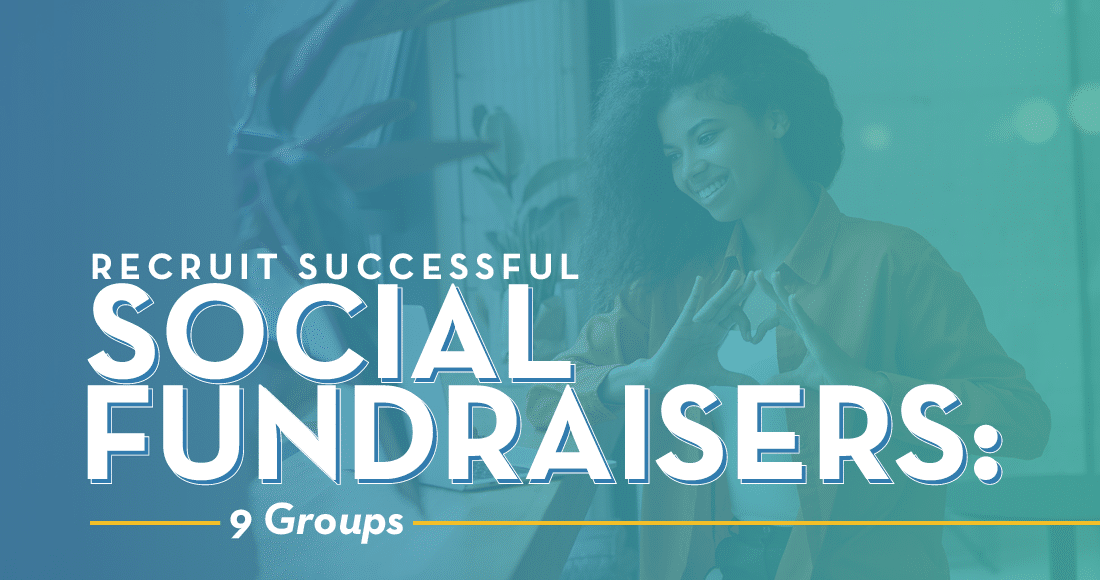 The following is a guest post from Koby Langner, Digital Marketing Manager at Kindful, a fundraising and donor management software that helps nonprofits know more, raise more, and do more good.

If you’ve seen any statistics or stories on social fundraising, you know the value it can offer to your organization. Social fundraising, also known as peer-to-peer fundraising, is when your supporters fundraise for your nonprofit. It’s a significant source of revenue for many nonprofits, especially with the rise of virtual fundraising.

But your success depends on your ability to recruit fundraisers. So how do you find the right supporters to ask?

If you have contacts in your donor database, you already have what you need to find successful social fundraisers. It just takes a little know-how to turn those contacts into groups of potential fundraisers. Then you can use those groups to segment your communication effectively.

In this post, we’ll share the qualities that make the best social fundraisers. Then we’ll walk you through the process of creating groups that you can use to recruit effective fundraisers for your next social fundraising campaign.

So what makes a good fundraiser? If your nonprofit has tried social fundraising campaigns, you know that it’s not uncommon to have profiles without a single dollar raised. So what separates these fundraisers from other fundraisers who raise hundreds of dollars more than their goal?

When it comes down to it, most of your supporters have the potential to succeed as fundraisers; they just need the right amount of support and training. That said, there are some baseline qualities of good fundraisers.

It also helps to recruit supporters who have had a personal experience with your organization. The more personal connections they have with you and your cause, the more likely they’ll be to ask their peers for donations.

Of all the signs of a potentially successful fundraiser, we think the best signal is that they’re already telling other people about you. Maybe they’re talking about you on social media. Maybe you’ve had donors say that they learned about you from a specific person. These are the supporters who are highly likely to fundraise for your organization.

To help you narrow down which of your supporters have these qualities, we’ll walk you through nine groups of potential fundraisers.

You already have the right contacts in your database for social fundraising. It’s just a matter of separating them into groups and deciding which ones are best for your organization. Here are nine groups to consider in your recruiting efforts.

If you have supporters who have participated in a crowdfunding, peer-to-peer, or social fundraising campaign, they should be at the top of the list to ask again!

Check your online fundraising platform to see who’s participated before, and don’t forget to check other platforms like Facebook to find supporters who may have launched crowdfunding efforts on their own. Keep in mind that some of these fundraisers may have not had success in the past, but that doesn’t mean that they can’t find success again with the right coaching and tips.

Donors are essential to funding your organization, but do they make good fundraisers? Donations are a good sign of support, but it doesn’t automatically mean they’d be willing to ask other people to give.

Our recommendation? Pay attention to your regular and recurring donors. Your one-time donors are important, but your donors that give again and again are more likely to be motivated and engaged.

The contacts who subscribe to your mailing list want to stay up-to-date for a reason. But how do you know who’s most likely to go from subscriber to fundraiser? Keep an eye on key email metrics like open rates and click-through rates. Your contacts that are actually opening, reading, and clicking on the links in your email are more likely to be engaged with your organization.

It can be hard to know how engaged your followers are on social media. Are they casually keeping up? Or are they paying attention to every update?

We recommend that you distinguish your casual and engaged followers by tracking who is actively engaging with you on social media. Keep track of comments, shares, and mentions of your nonprofit and you’ll have a good idea of which followers would be most likely to engage their audiences as fundraisers.

Most nonprofits need volunteers to help with their operations, programs, and events. A benefit of having volunteers is that these supporters get first-hand experience with your cause.

Look to the individuals and groups who keep coming back and have built stronger bonds with your organization.

If your organization hosts in-person or virtual events, consider your previous attendees as potential fundraisers.

Events facilitate personal connections for supporters. They will likely get to hear stories in real time about your organization’s work and see the impact you’ve made. These in-person experiences can give your previous event attendees extra motivation for success as fundraisers.

No one knows more about your impact than those who have benefited from it or participated in it directly. That’s why your own beneficiaries and program participants can be the most powerful fundraisers.

Disclaimer: There are many reasons why it might not be appropriate to ask your beneficiaries to launch fundraisers. It may be too sensitive if your organization works in areas like human trafficking, mental health, or addiction treatment. At worst, it could come across as exploitative. Program participants may be a better option, but always err on the side of dignifying your beneficiaries when considering their involvement with your development initiatives.

If you sell products or merchandise, don’t count out your consumers. People who have purchased your products will likely be open to promoting your products.

Product fundraising can be a way to make social fundraising more approachable for this group. Maybe your beneficiaries roast coffee beans or create their own artwork. Asking previous consumers to fundraise by selling your products might be easier than just asking for donations.

Don’t forget to look outside of your organization for fundraisers too! Think about partners that you’ve worked with that might be willing to participate in a social fundraising campaign.

Would they help spread awareness of your campaign? Would they offer a matching gift incentive to your fundraisers? Don’t be afraid to ask other organizations, corporate partners, and previous sponsors to get involved in their own ways.

In this example, we sorted groups into categories based on who we think is most likely to succeed:

Influencers – This group is most likely to succeed. You could reach out to this group about starting their own teams, encouraging other fundraisers, and sharing tips. You can also encourage them to set the highest goals. Influencers include:

Engagers – This group is likely to participate, but they’ll need more support. You’ll want to provide some coaching to give them the confidence to become a successful fundraiser. Engagers include:

Followers – This group consists of those who may or may not participate in your fundraiser. You’ll need to do some extra convincing to move them from fringe to fundraising. Followers include:

Once you decide on your social fundraising groups, the next step is to use your CRM or donor management platform to run your reports. If you’re not familiar with your tool’s reporting features, we recommend checking out support articles or working with a support specialist to get everything up and running.

From there, you can use the contacts in each group to create your email series. Make sure to keep nonprofit email marketing best practices in mind like effective donor segmentation to increase your open and click-through rates.

With the right donor management platform and social fundraising platform, it’s easy to find and recruit supporters to your fundraising campaign. Keep your fundraisers motivated and watch as new contacts and donations start coming in!