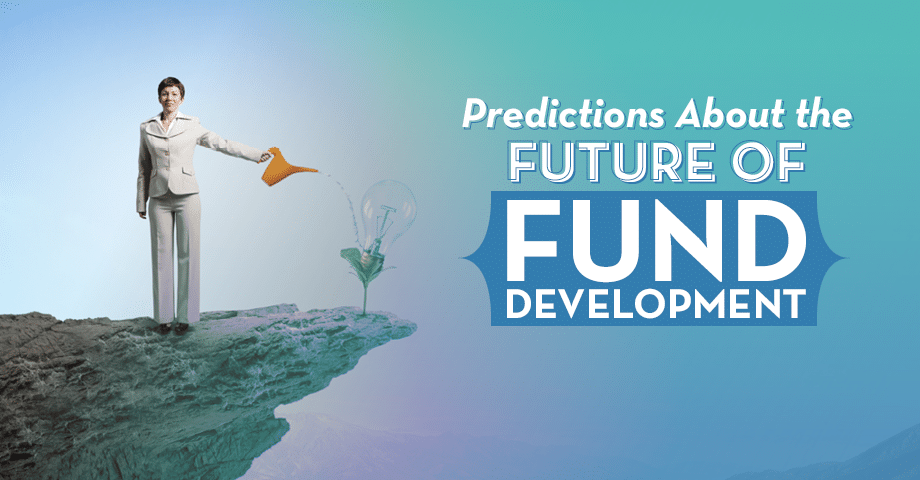 Predictions About the Future of Fund Development

Since the 2010s, the landscape of fund development in the U.S. has so radically transformed, Gen Zs would hardly believe us if we told them what fundraising used to be like. Technological, cultural, and societal shifts have forced nonprofit fund development to re-invent itself again and again. The good news about these shifts is this: more funds have been raised than ever thought possible 20 or 30 years ago. In fact, Giving USA reported that Americans gave $102.5 billion in 1990 to charitable causes, a figure that seemed lofty then – only to be dominated by the $410 billion reported in gifts in 2017. What an exciting time to be in fund development! If the last 20-years of fund development advancements have shown us anything about the next 20, it is that this landscape is ever-evolving.

Here are our 7 predictions, in no particular order, about the future of fund development.

Prediction #1: The future of fund development will use technological advancements to engage donors face-to-face and at every giving level.

The core of fundraising has been and will continue to be about relationships. We predict nonprofits will continue to use rapid advancements in technology such as the predictive power of artificial intelligence (AI) to identify prospects for giving and then advance their philanthropic commitment with face-to-face meetings. And the rapid growth in data is what is fueling these changes.

Traditionally, finding major donor prospects was expensive, difficult to scale, and time-sensitive. Now and in the future, more and more fund development teams will be utilizing technological advancements to find more prospective donors for less money and time than ever thought possible. That said, nonprofits will need to continue to re-engineer their donor engagement strategies at every level moving forward to utilize these advancements.

For example, according to the Stanford Social Innovation Review, the University of Louisiana Lafayette is already leveraging technological advancements to connect with donors who have the potential to upgrade to middle and major levels; so far, it has raised more than $650,000 in revenue that it otherwise may not have tapped into.

Explore ways your nonprofit can utilize technological advancements such as AI for your fund development plans. (Hint, Hint: you might want to start by checking out boodle.ai…)

Prediction #2: The future of fund development will include greater revenue diversity.

In the future, the way nonprofits raise funds will be less homogeneous. The increasingly competitive landscape of nonprofit fundraising demands so. Between the sheer number of nonprofits that exist now in the United States (1.5 million, according to the National Center for Charitable Statistics), and the amount of noise across 24/7 digital marketing channels, nonprofits must remain agile in their revenue diversity game. We expect to see more innovative and creative strategies from nonprofits as the norm, rather than the exception.

Joe Jenkins, the Director of Supporter Impact and Income at the Children’s Society reported in a recent interview, “Just as there isn’t only one business model for the commercial sector, nor should there be for charities,” Jenkins remarked. “In the future, I expect to see a far greater diversity of approaches within civil society.”

Review your fundraising streams. How diverse are they? Brainstorm creative and innovative fundraising avenues with your development team.

Prediction #3: The future of fund development will embrace experiential fundraising.

Technologies such as virtual reality (VR) and augmented reality (AR) will enable new varieties of experiential fundraising. According to Rhodri Davies, head of policy at the Charities Aid Foundation, these realities will be used as “empathy machines” to generate donations.

One early adopter of experiential fundraising is Pencils of Promise (PoP).

In 2015, PoP wanted to increase donations at their annual celebrity-studded gala and used a VR experience to do so. PoP knew if they could show attendees what it was like to go to school in a developing nation, it could create an unmatched emotional connection that might inspire more donations for their students. So, at their gala, they gave attendees VR headsets that transported them to a school in Ghana.

The results were stunning. The VR experience helped PoP raise an additional $500,000 for a total of $2.4 million that evening in response. Plus, their video was viewed nearly two million times on Facebook.

In the same light, we will see nonprofits — from small to large — create AR and VR experiences in campaigns, videos, ads, apps, events, and more to inspire additional donations for their causes.

Explore AR and VR opportunities to raise more funds in your pre-existing marketing plan. Could you incorporate it into the next video you film? Add it into your app? Utilize it in your next billboard?

Prediction #4: The future of fund development will have more viral fundraising challenges.

We expect to see an increase in advanced digital fundraising campaigns such as viral challenges.

Consider the impact viral challenges have already made:

In 2013, the viral fundraising challenge we remember as the “Ice Bucket Challenge” raised more than $100 million for the ALS Association.

In 2015, the Movember Foundation had raised more than $710 million to fund 1,200 men’s health projects through it’s annual “No Shave November” challenge.

In 2018, RAICES raised over $20 million for immigration legal services in 12 days, making it the biggest single Facebook Fundraiser to date.

Ask yourself: when was the last time you created content for your fundraisers that was viral-worthy? What sort of stories, themes, or “asks” would your donors be most excited to participate in if it were a challenge?

Prediction #5: The future of fund development will include increased corporate giving.

With the rise of conscious consumerism, corporations have started to invest more in Corporate Social Responsibility programs (or, “CSRs”). Research has confirmed that there is a positive association between how engaged and supported employees feel when they have opportunities to give back in their workplace to the community.

A 2016 study by Cone Communications revealed that 58% of Americans consider a company’s social and environmental commitments when deciding where to work.

Nonprofits will have increasing opportunities to be involved in CSR’s, corporate sponsorships and partnerships, and volunteer opportunities. It’s a win-win solution: nonprofits expand to new donor networks and corporations increase their social responsibility fulfillment.

If you do not already have a corporate giving component in your fundraising plan, begin to research opportunities with your board members and corporate connections. Start with previous event sponsors to explore future partnerships on a deeper level. Additionally, consider these options: corporate gifts, percentages of sales, round-up, matching, support pipeline, support operations, gifts in kind, employee fundraising, customer fundraising, community outreach, media support and inventory, gifted social media, and event integration.

Prediction #6: The future of fund development will have greater real-time fundraising opportunities.

We suspect there will continue to be a steady rise of real-time fundraising opportunities such as Peer-to-Peer (P2P) and crowdfunding.

According to the 2018 Giving Report, 74% of donors give because they are inspired by online content (social media, email, and website). Nonprofits must continue to invest in digital platforms to stay relevant. Part of staying relevant will be implementing more real-time fundraising opportunities from impact statements to updates in P2P and crowdfunding goals.

The Children’s Miracle Network Hospitals’ Extra Life program is a good example of staying relevant. They started with an innovative idea to center their P2P campaign around video gaming to tap into the male millennial audience. In 2017, this generated more than $10 million. The Children’s Miracle Network Hospital also gave their fundraisers the tools for DIY opportunities to raise funds outside of the event itself. For example, one participant pledged to get an Extra Life tattoo if his friends contributed $2,000 to his fundraising page.

In crowdfunding, we expect to see more nonprofit’s utilizing disappearing content (“ephemeral” content) as well. This is when content deliberately times out after 24-hours. Think of Snapchat or Instagram’s “stories” feature. This kind of content can come across as more authentic, original, and urgent.

Take an inventory of your current P2P and crowdfunding plans. Do they include real-time updates? Are they relevant? Consider new ways to utilize disappearing content in your next campaigns.

Prediction #7: The future of fund development will be built around customizable, proven impacts.

Long ago were the days when donors gave to nonprofits simply because of name recognition and the number of years a charity has been around (although, that will not hurt you). In 2000, Giving USA reports that there were around 688,600 charities in the United States. In 2020, they estimate there will be more than 1.7 million.

Twenty years ago, when donors wanted to give to help those affected by cancer, they might have only considered Susan G. Komen. Now, with a quick search, they can donate to charities who help individuals with cancer in a variety of ways: donating hair, participating in a race to benefit cancer research, and helping those with specific cancers. This is why it will be more important than ever to make sure your supporter’s donor experience is as customized as possible with proven impacts. In fact, 75% of them will be more likely to donate if you do so.

charity: water is amazing at this. When you go to their website, you (the potential donor) are taken on an emotionally stirring experience – literally called “the journey” – where you can see charity: water’s proven track record, a four-part video series to see where your money would go, and Google Maps will even show you which specific well your donation went towards building.

Look at your nonprofit’s website home and donation pages. Are they emotionally stirring? Do they create an entirely customizable donor experience? Do they provide a proven track record and impact statements so donors know exactly where their money is going? If not, maybe it is time to tweak them.

Key Takeaway: the future of fund development will utilize technological advancements for every level of fundraising, innovate diverse fundraising strategies, collaborate with other sectors, and re-engineer donor engagement strategies to meet the demands of a rapidly advancing digital society.

What predictions would you add to this list? Let us know over at boodle.ai.