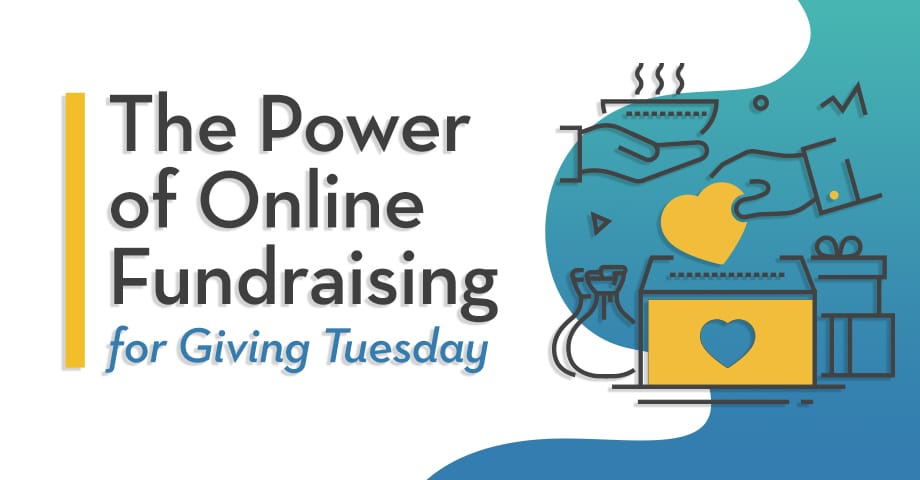 The Power of Online Fundraising for Giving Tuesday

Leveraging online fundraising tools in your next Giving Tuesday campaign, or any online campaign, is a surefire way to empower supporters and expand your fundraising impact.

The Northern Illinois University (NEIU) Foundation strives to advance the interests and welfare of their institution. For Giving Tuesday, NEIU Foundation leveraged OneCause Peer-to-Peer to support programs and the students those programs serve. Let’s dive into what made their campaign a success.

NEIU Foundation serves to secure and steward resources that support the future growth of the University. That’s a pretty big mission supporting many different departments and programs. To distinguish them in their campaign, NEIU Foundation leveraged campaign Affinity Groups. Affinity Groups are ways within the OneCause Peer-to-Peer software to connect groups of common interests in your campaign. These groups allowed: 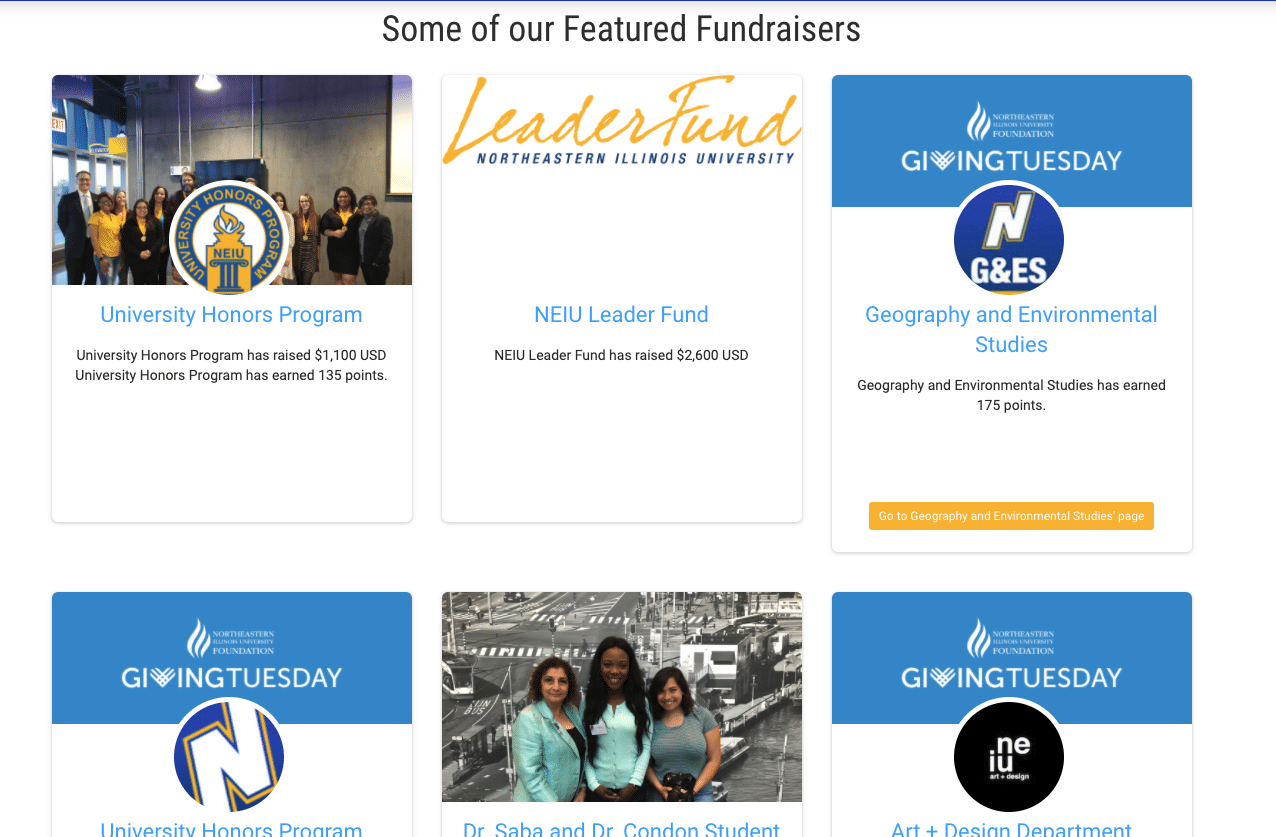 Through tracking social promotion, supporters can get involved and raise more money and awareness for their cause. Their reach can match their capacity and commitment! 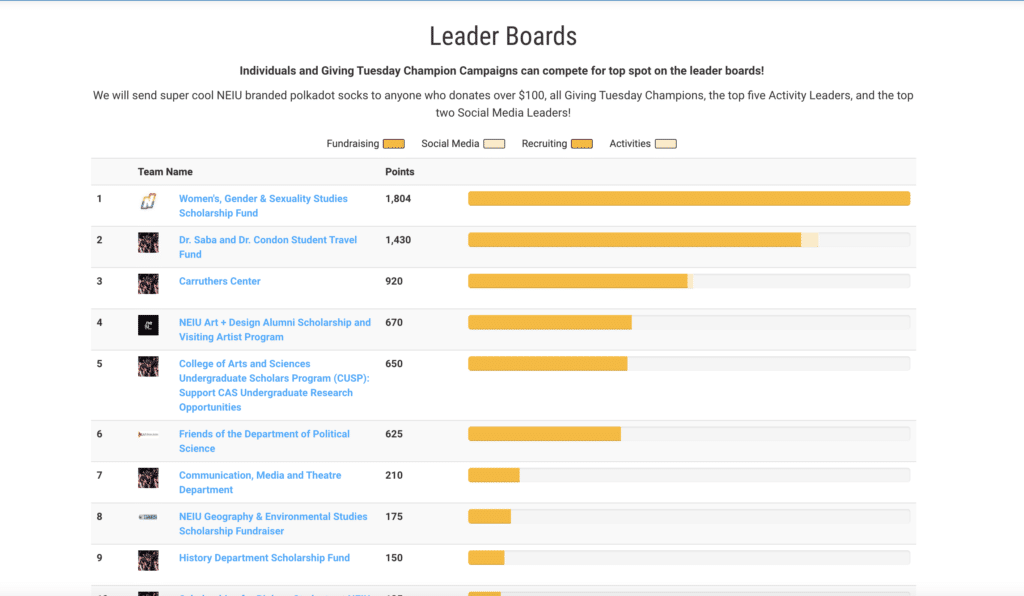 NEIU Foundation also incentivized participation with prizes. For example, to win university branded socks, supporters had to do one of the following activities:

Turnstone Center for Children and Adults with Disabilities 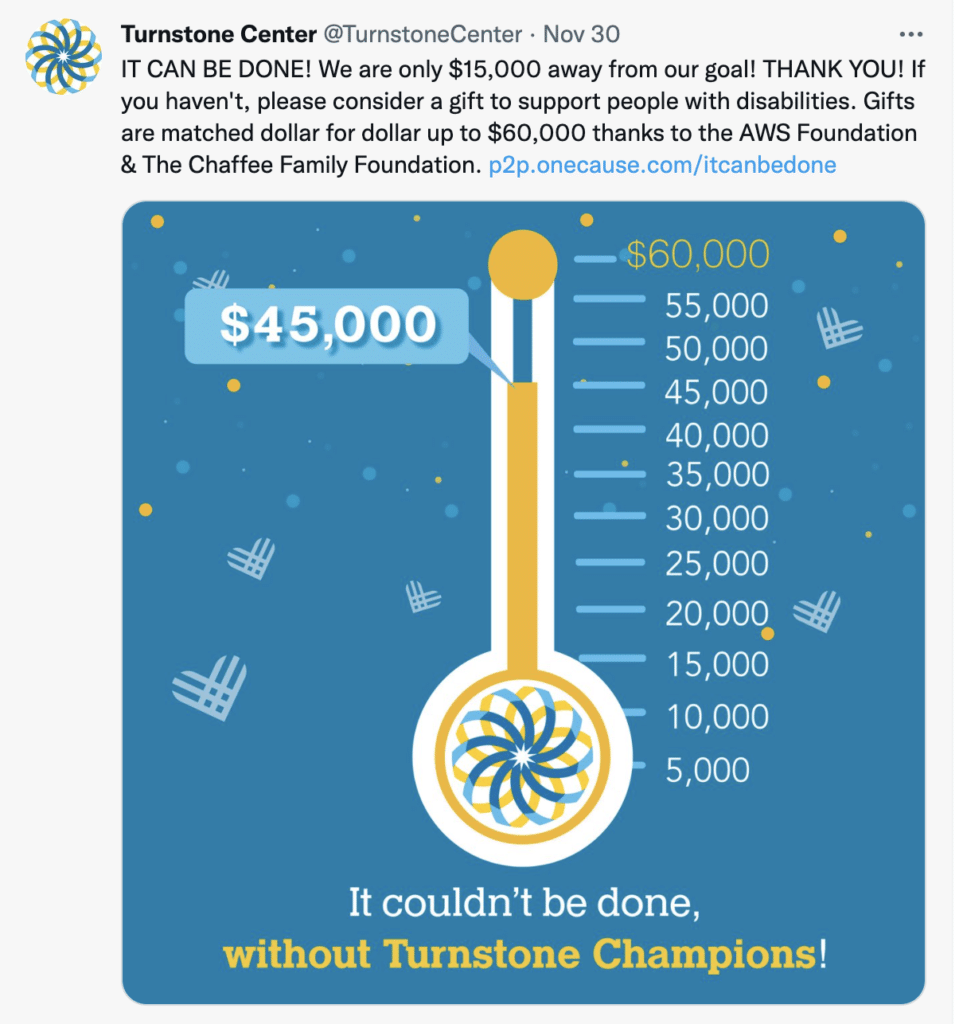 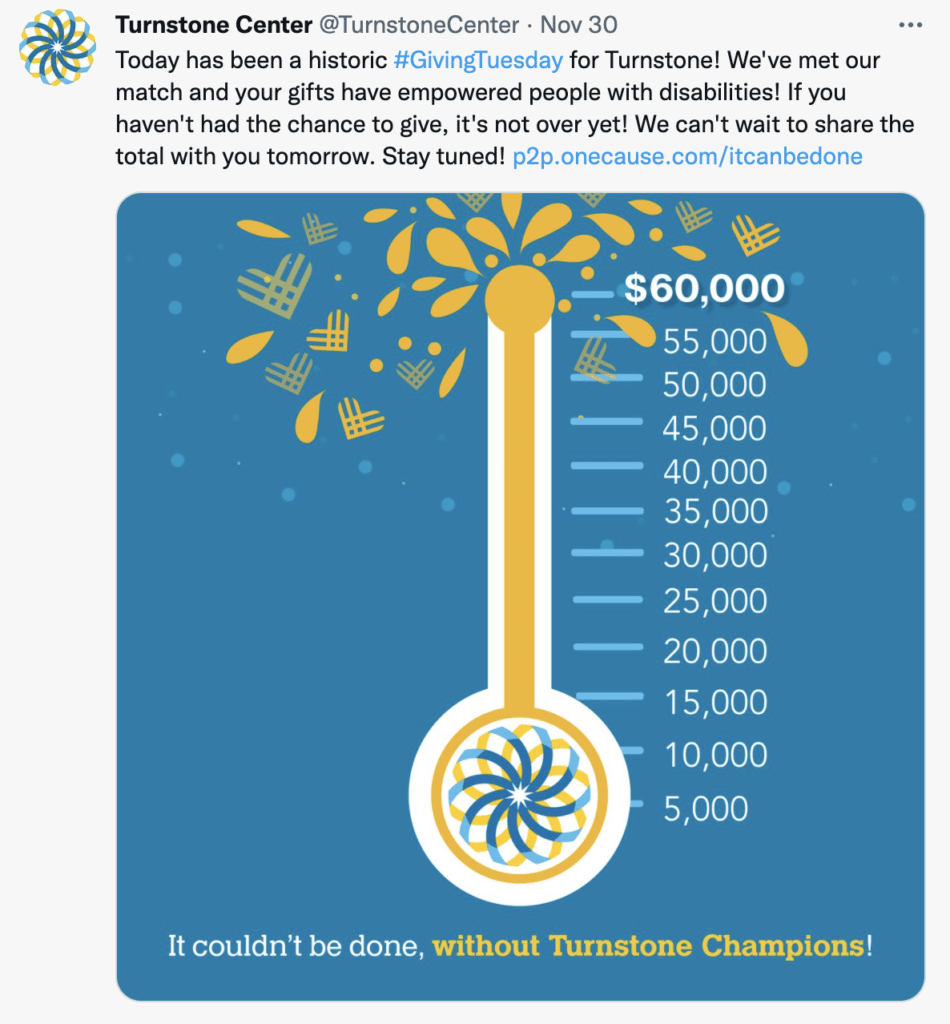 Leveraging a matching challenge in your online giving campaign provides an easy and flexible way to continue to highlight your campaign in promotional efforts and raise more for your cause.

A great way for a supporter to understand the value of their donation is to tie them to tangible results. Turnstone was able to quantify the impact of their fundraising efforts through the promotion of personal impact stories from their community. Through social promotion and online campaign site highlights, Turnstone was able to: 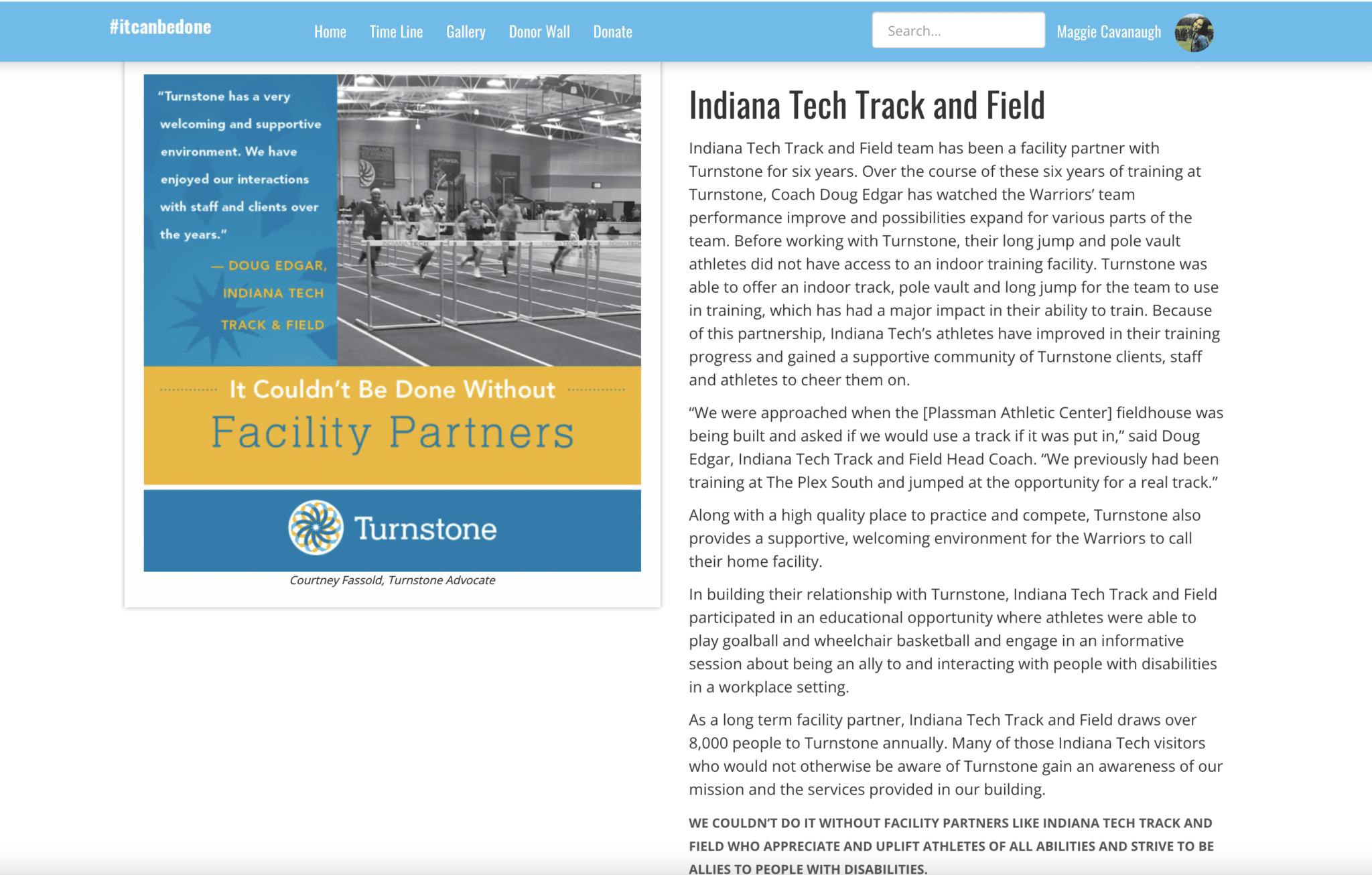 Turnstone Center continued their campaign success through implementing social media as a part of their outreach strategy. With built-in social integrations, OneCause Peer-to-Peer solution was able to easily link to social accounts, like Twitter, with the ability to efficiently share their campaign on social channels. Their social media outreach helped Turnstone: 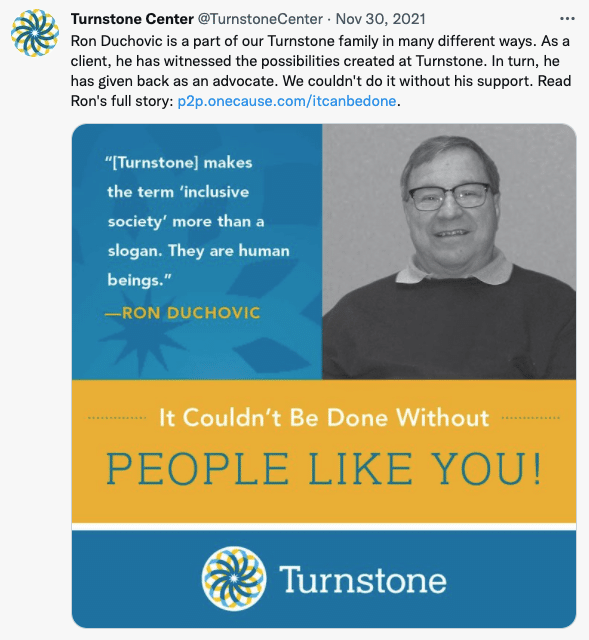 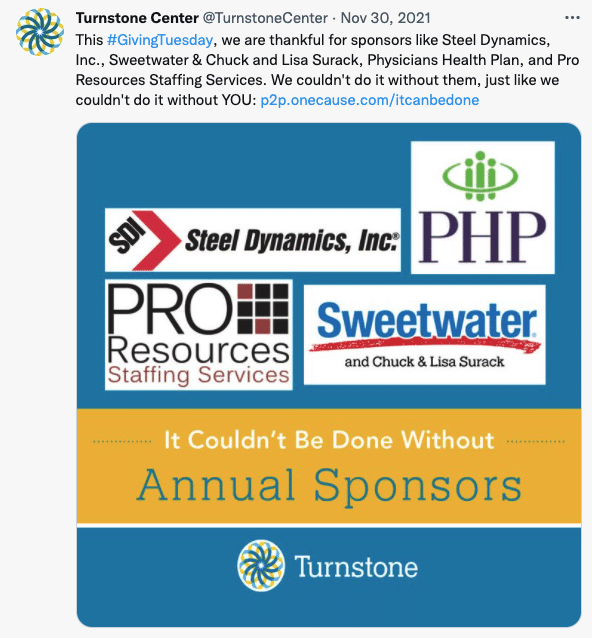 Through their dedicated efforts, Turnstone achieved:

Canine Companions leveraged Giving Tuesday to raise funds to help provide trained service dogs to individuals with disabilities. They wanted to promote and provide the gift of independence through their Giving Tuesday campaign. Let’s see how they did just that!

To keep donors engaged and understanding the direct value of their donations, Canine Companions held a day long live stream of their service puppies-in-training.

During the live stream, held on their website, Canine Companions linked to a OneCause Peer-to-Peer Donation Form, which allowed for direct donation and linked to their campaign. 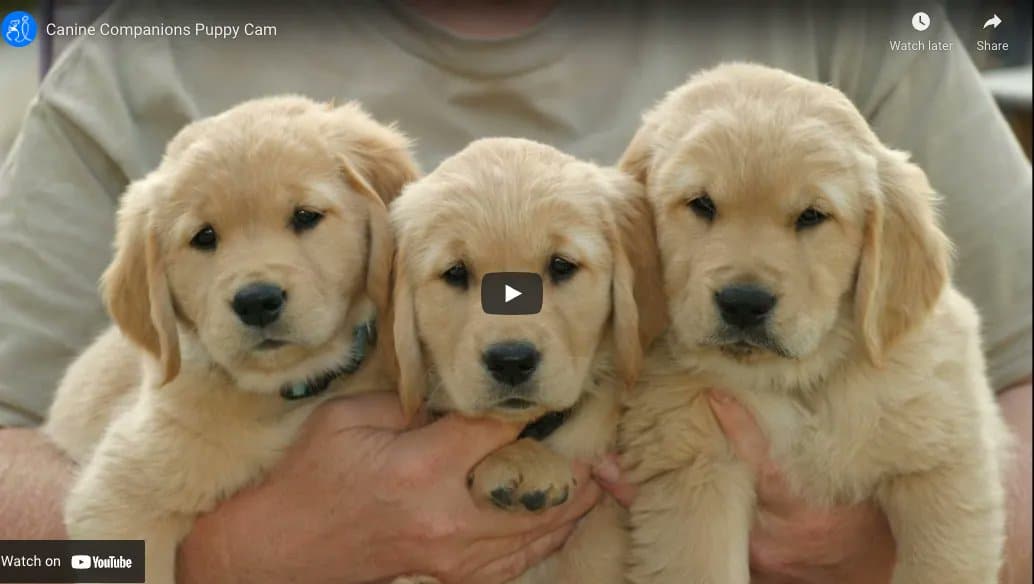 Outside of their live stream, Canine Companions continue to communicate about their campaign as the day progressed. Their donor communication took three main forms: 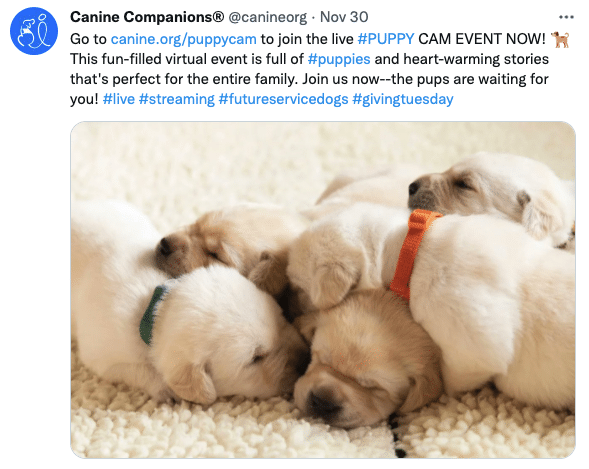 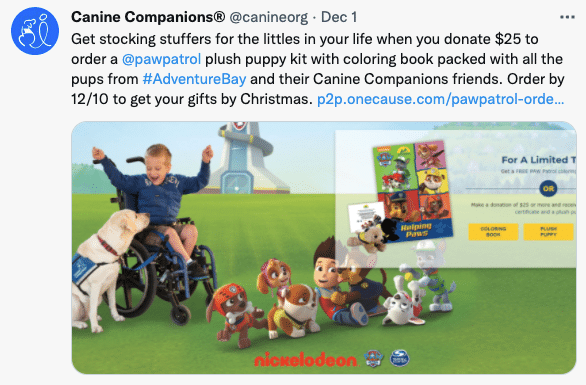 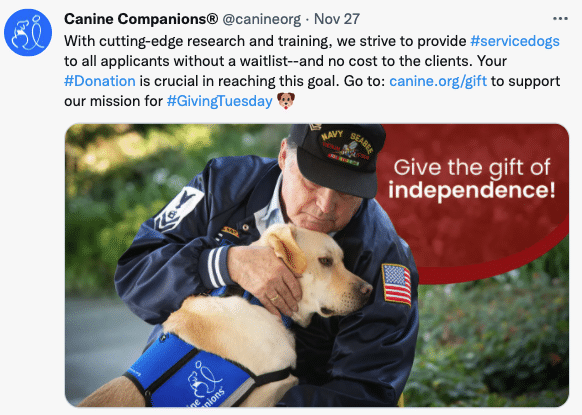 All forms of donor communication strategically linked back to their campaign site.

Linking to a Larger Campaign

Canine Companions saw great success this past Giving Tuesday because of their successful campaign!