Home > On Demand Sessions > The Power of Untold Stories: How Impactful Video Drives Everything

The Power of Untold Stories: How Impactful Video Drives Everything

Back to Raise App

It’s easy to get caught in a rhythm of telling the same kind of video stories for fundraisers (patient stories, client stories, voiceover videos with graphics and stats, etc.). In the past, they have worked well for many organizations. But what we’ve done in the past no longer works! In this session Lauren Ready will walk fundraisers through how to find and tell untold stories inside their organization, specifically designed to help raise funds and awareness. We’ll also talk about how the capture (not recreate) impactful moments on camera. Lauren will be using 3-5 real life examples of impactful moments she’s captured on camera and explain how each story was planned, executed and edited – intentionality behind us every step of the way but with an openness to letting things happen.

Given her years of experience in TV News, Lauren challenges participants to be their own investigative journalists and find stories that people aren’t expecting. Participants will walk away with 5 ways to guarantee they capture an impactful moment on camera, 2-3 new story ideas that go beyond “the usual headlines,” and techniques for when and how to share that story at an event. 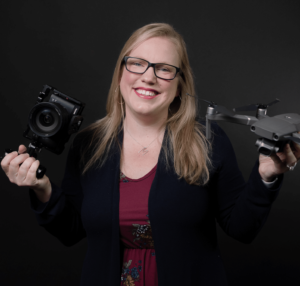 Lauren is an Emmy Award winning storyteller who specializes in untold stories. She began her career at 17 years old in her first TV job as a production assistant. She ran cameras during the evening newscasts after school. Eventually she worked her way up to a job in front of the camera and spent time as a reporter in Iowa, Nebraska and Memphis.

After a decade working in newsrooms, she transitioned from a life in front of the camera, to a life behind the camera telling stories for nonprofits.
As owner and Principal Storyteller for Forever Ready Productions, her vision for storytelling is at the heart of every production. She is a four time Regional Emmy Award winner from the Academy of Television Arts & Sciences.

It’s this background in reporting — where production happens fast and complex human stories are at the center — that reminds Lauren to dig deeper than the headline; telling untold stories. Lauren’s specialty is taking moments of human experience and turning them into dynamic and compelling videos.

Lauren is an Iowa native and a graduate of Loras College. She is based in Memphis, TN with her husband, Scott and their son Max. She’s a part 107 certified drone pilot, loves rock climbing and photography.

Workshop: Fundraise Awesomer! How Not to Suck at Managing the 10,000 Things on Your Plate in Order to Find Time to Build Better Donor Relationships